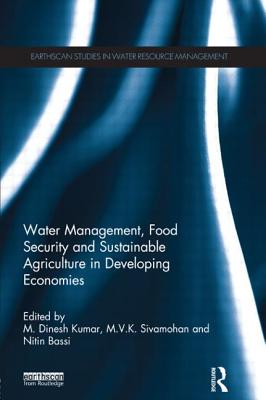 This book addresses strategies for food security and sustainable agriculture in developing economies. The book focuses primarily on India, a fast developing economy, whose natural resource base comprising land and water supporting agricultural production is not only under enormous stress, but also complex and not amenable to a uniform strategy. It critically reviews issues which continue to dominate the debate on water management for agricultural and food production.

The book examines the validity of the claim that large water resources projects cause serious social and environmental damages using global and national datasets. The authors examine claims that the future of Indian agriculture is in rain-fed farming supported by small water harvesting. They question whether water-abundant eastern India could become the granary of India, through a groundwater revolution with the right policy inputs. In the process, they look at the less researched aspect of the food security challenge, which is land scarcity in eastern India. The book analyzes the physical, economic and social impacts of large-scale adoption of micro irrigation systems, using a farming system approach for north Gujarat. Through an economic valuation of the multiple use benefits from tank systems in western Orissa, it shows how value of water from large public irrigation systems could be enhanced.

The book also looks at the reasons for the limited success in bringing about the much needed institutional reforms in canal irrigation for securing higher productivity and equity using case studies of Gujarat, Madhya Pradesh and Maharashtra. Finally it addresses how other countries in the developing world, particularly Sub-Saharan Africa could learn from Indian experience.

M. Dinesh Kumar is Executive Director of the Institute for Resource Analysis and Policy (IRAP), Hyderabad, India. M.V.K. Sivamohan is Principal Consultant for IRAP, and is based in Hyderabad. Nitin Bassi is a Senior Researcher with IRAP and is based in Delhi. Contributors: A. Narayanamoorthy, V. Niranjan, Ranjan Panda, Zankhana Shah, O. P. Singh, and P. K. Viswanathan.