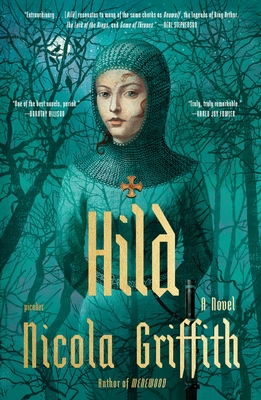 WINNER OF THE WASHINGTON STATE BOOK AWARD FOR FICTION

In seventh-century Britain, a new religion is coming ashore and small kingdoms are merging, frequently and violently. Hild is the king's youngest niece, with a glittering mind and a natural authority.

She is destined to become one of the pivotal figures of the Early Middle Ages: Saint Hilda of Whitby. But for now she has only the powerful curiosity of a bright child and the precarious advantage of a plotting uncle, Edwin of Northumbria, who will stop at nothing to become overking of Angles. Hild establishes a place for herself at his side as the king's seer, and she is indispensable—as long as she doesn't lead Edwin astray. The stakes are high—life and death—for Hild, for her family, and, increasingly, for those who seek the protection from this strange girl who seems to see the future. Drawing from the few records history has left us, Nicola Griffith has brought the young Saint Hilda's harsh, but beautiful, world to vivid, absorbing life.

Nicola Griffith (she/her) is a dual UK/US citizen living in Seattle. She is the author of award-winning novels including Hild and Ammonite, and her shorter work has appeared in Nature, New Scientist, New York Times, etc. She is the founder and co-host of #CripLit, holds a PhD from Anglia Ruskin University, and enjoys a ferocious bout of wheelchair boxing. She is married to novelist and screenwriter Kelley Eskridge.

“One of the best novels, period.” —Dorothy Allison

“Extraordinary...[Hild] resonates to many of the same chords as Beowulf, the legends of King Arthur, The Lord of the Rings, and Game of Thrones.” —Neal Stephenson

“Hild is a book as loving as it is fierce, brilliant, and accomplished. To read it felt like a privilege and a gift.” —NPR

“Terrific… Griffith has taken what little is known of the life of St. Hilda and imagined a vibrant, if brutal, world... Hild [is] a pleasure to sink into.” —The Washington Post

“Sharp as steel, clear as garnet, essential and sensual and right, Griffith's telling of Hild's adventures offers us something far better than mere comfort: the lure of the sublime.” —The Seattle Times

“Splendid...I can hardly wait for the next.” —Los Angeles Review of Books

“You could describe Hild as being like Game of Thrones without the dragons, but this is so much deeper than that, so much richer. A glorious, intensely passionate walk through an entirely real landscape, Hild leads us into the Dark Ages and makes them light, and tense, and edgy, and deeply moving. The research is flawless, the characters fully alive. If it wasn't like this, it should have been--and I'm sure that it was!” —Manda Scott