Get the Truth: Former CIA Officers Teach You How to Persuade Anyone to Tell All (Paperback) 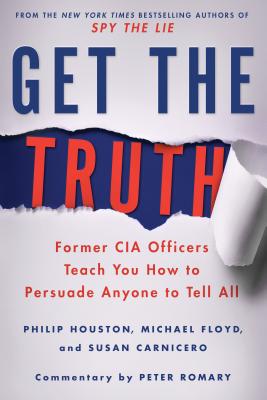 Get the Truth: Former CIA Officers Teach You How to Persuade Anyone to Tell All (Paperback)

Getting someone to tell the truth is an essential skill that very few people possess. In the boardroom, classroom, or our own homes, every day we interact with others and try to get the truth from them.

People are often untruthful out of fear of negative consequences associated with divulging information. But if a person is made to forget the long-term outcomes of lying, he or she can be influenced to disclose sensitive information that's being withheld. The aim is to encourage the person to remain in short-term thinking mode, shifting focus away from the long-term ramifications of telling the truth.

As former CIA agents and bestselling authors of Spy the Lie, Philip Houston, Mike Floyd, and Susan Carnicero are among the world's best at detecting deceptive behavior and eliciting the truth from even the most accomplished liars. Get the Truth is a step-by-step guide that empowers readers to elicit the truth from others. It also chronicles the fascinating story of how the authors used a methodology Houston developed to elicit the truth in the counterterrorism and criminal investigation realms, and how these techniques can be applied to our daily lives. Using thrilling anecdotes from their careers in counterintelligence, and with easy-to-follow instructions, the authors provide a foolproof means of getting absolutely anybody to give an honest answer.

Get the Truth is the easy and effective way to learn how to get the truth every time.

Philip Houston is a nationally recognized authority on deception detection, critical interviewing and elicitation. His 25-year career with the Central Intelligence Agency included thousands of interviews and interrogations for the CIA and other federal agencies, both as an investigator and as a polygraph examiner. He is credited with developing a detection of deception methodology currently employed throughout the U.S. intelligence and federal law enforcement communities. Phil introduced the detection of deception methodology to the corporate world with the co-founding of Business Intelligence Advisors, where he works with the company's largest clients in the U.S. and abroad. Houston is also the author of Spy the Lie.

Michael Floyd began his career as a commissioned officer in the U.S. Army Military Police, then served as a Special Agent with the Central Intelligence Agency and the National Security Agency. He now provides training and consulting services for Forbes Top 10 families and large corporations throughout North America, Europe and Asia. He is widely recognized as a leading authority on interviewing, detection of deception and elicitation in cases involving criminal activity, personnel screening and national security issues.

A former security specialist with the Central Intelligence Agency, Susan Carnicero has 20 years of experience in interviewing, interrogation and polygraph examination, focused primarily on national security, employment and criminal issues. Susan is the developer of a behavioral screening program currently used within the federal government and in a variety of private industries. She is widely considered a leading authority on interviewing, detection of deception, and elicitation.

PETER ROMARY is an attorney and partner in QVerity, Managing Partner of QVerity Legal, and an Adjunct Professor at Campbell University School of Law. He is an internationally recognized expert in the areas of detection of deception, interviewing, elicitation, risk management, threat assessment and management, conflict resolution, and litigation risk management. He has worked as a contractor, lectured, and consulted for government and private-sector clients in the U.S. and abroad. For his work he has received, among others, some of the highest honors from 14 states as well as the Ellis Island Medal of Honor and the John Sanders Award, which is the highest honor awarded by the Association of Student Governments representing the 220,00 students University of North Carolina System. Romary holds both English and US law degrees.