Inventing Equality: Reconstructing the Constitution in the Aftermath of the Civil War (Hardcover) 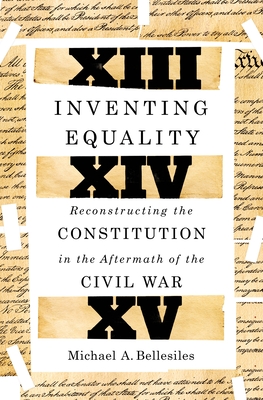 Inventing Equality: Reconstructing the Constitution in the Aftermath of the Civil War (Hardcover)

The evolution of the battle for true equality in America seen through the men, ideas, and politics behind the 13th, 14th, and 15th Amendments passed at the end of the Civil War.

On July 4, 1852, Frederick Douglass stood in front of a crowd in Rochester, New York, and asked, “What to the slave is the Fourth of July?” The audience had invited him to speak on the day celebrating freedom, and had expected him to offer a hopeful message about America; instead, he’d offered back to them their own hypocrisy. How could the Constitution defend both freedom and slavery? How could it celebrate liberty with one hand while withdrawing it with another? Theirs was a country which promoted and even celebrated inequality.

From the very beginning, American history can be seen as a battle to reconcile the large gap between America’s stated ideals and the reality of its republic. Its struggle is not one of steady progress toward greater freedom and equality, but rather for every step forward there is a step taken in a different direction. In Inventing Equality, Michael Bellesiles traces the evolution of the battle for true equality—the stories of those fighting forward, to expand the working definition of what it means to be an American citizen—from the Revolution through the late nineteenth century. He identifies the systemic flaws in the Constitution, and explores through the role of the Supreme Court and three Constitutional amendments—the 13th, 14th, and 15th—the ways in which equality and inequality waxed and waned over the decades.

MICHAEL BELLESILES, once a visiting professor at Trinity College in Connecticut and a professor of history at Emory University, is the author of numerous books on American history—including 1877 and A People’s History of the U.S. Military. Bellesiles received his BA from the University of California–Santa Cruz and his PhD from the University of California at Irvine. He lives in Connecticut.
"This thoughtful, splendidly detailed book traces the long and tangled history of the Constitution from its inception through the Civil War, ending with the Supreme Court’s tragic dashing of Reconstruction era dreams of equality. No other single volume so clearly illuminates the three postwar amendments or offers such a nuanced analysis of the complicated interplay of politics, race, and gender. Skillfully researched and highly readable." -- Douglas R. Egerton, author of Heirs of an Honored Name: The Decline of the Adams Family and the Rise of Modern America