Let There Be Water: Israel's Solution for a Water-Starved World (Paperback) 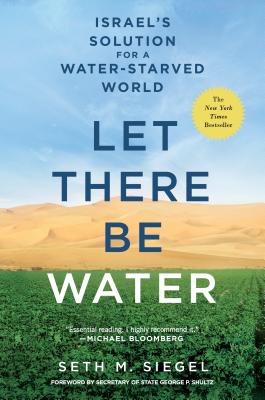 Let There Be Water: Israel's Solution for a Water-Starved World (Paperback)

As every day brings urgent reports of growing water shortages around the world, there is no time to lose in the search for solutions.

The U.S. government predicts that forty of our fifty states-and 60 percent of the earth's land surface-will soon face alarming gaps between available water and the growing demand for it. Without action, food prices will rise, economic growth will slow, and political instability is likely to follow.

Let There Be Water illustrates how Israel can serve as a model for the United States and countries everywhere by showing how to blunt the worst of the coming water calamities. Even with 60 percent of its country made of desert, Israel has not only solved its water problem; it also had an abundance of water. Israel even supplies water to its neighbors-the Palestinians and the Kingdom of Jordan-every day.

Based on meticulous research and hundreds of interviews, Let There Be Water reveals the methods and techniques of the often offbeat inventors who enabled Israel to lead the world in cutting-edge water technology.

Let There Be Water also tells unknown stories of how cooperation on water systems can forge diplomatic ties and promote unity. Remarkably, not long ago, now-hostile Iran relied on Israel to manage its water systems, and access to Israel's water know-how helped to warm China's frosty relations with Israel.

Beautifully written, Seth M. Siegel's Let There Be Water is and inspiring account of the vision and sacrifice by a nation and people that have long made water security a top priority. Despite scant natural water resources, a rapidly growing population and economy, and often hostile neighbors, Israel has consistently jumped ahead of the water innovation-curve to assure a dynamic, vital future for itself. Every town, every country, and every reader can benefit from learning what Israel did to overcome daunting challenges and transform itself from a parched land into a water superpower.

SETH M. SIEGEL is a lawyer, an activist, a serial entrepreneur and the author of the New York Times bestseller Let There Be Water. His writing has appeared in The New York Times, The Wall Street Journal, The Los Angeles Times, and in leading publications in Europe and Asia. He has spoken on water policy hundreds of times around the world and in Congress, the United Nations, the World Bank, and at dozens of leading universities. He is married and lives in New York City.

"Insightful...an instructive reminder that climate and geography don’t control a state’s destiny. Nature, as it turns out, is not as important as government nurture." —The Wall Street Journal

“A must-read that is both fascinating and informative. “ —San Francisco Chronicle

“With global water shortages generating political, military and humanitarian crises across the globe, Israel's astonishing ingenuity for wresting abundance from drought is an inspiring and instructive blueprint for the planet.” —Robert F. Kennedy, Jr.

“If you are worried about global water shortages-and you should be-read this book. Seth Siegel brings an urgent message of how the world can save itself using remarkable techniques and technology developed in Israel. Let There Be Water is essential reading. I highly recommend it.” —Michael Bloomberg

“A really interesting account of the possibilities for technology to solve one of the greatest and underestimated challenges of our age.” —Tony Blair

“Water scarcity is one of the most urgent threats to our economy and society. In Let There Be Water, Seth Siegel explores the crisis through the lens of a solution, telling the powerful story of how the people of Israel came together to overcome their water problems, so that the rest of the world can learn from their example and get ahead of the looming crisis.” —Arianna Huffington

“This extraordinary work will long be read by people grappling with water shortages and other seemingly insurmountable challenges.” —Shimon Peres, Nobel Peace Prize laureate and former president of Israel

“From the arid front lines of the freshwater scarcity crisis, Siegel provides an eye-opening account how Israel turned adversity into opportunity to become an innovative pioneer in the global quest for a new water paradigm.” —Steven Solomon, author, WATER: The Epic Struggle for Wealth, Power, and Civilization

“Let There Be Water is an essential look at the unknown story of how Israel has avoided the coming global water crisis despite being mostly desert. Through smart policies, conservation, technology and a new water-focused export industry, this book shares water-independent Israel's lessons that every interested citizen and country needs to know.” —Dan Senor, co-author of the New York Times bestseller Start-Up Nation

“Let There Be Water is the expertly and movingly told story of how Israeli specialists and NGOs greatly helped many Africans gain access to clean water. Seth Siegel shows how Israel uses its water skills both to help developing nations and as a tool of diplomacy. We all have so much to learn from this superb book.” —Ruhakana Rugunda, Prime Minister of Uganda

“With current drought conditions across Western North America, this hard-won water wisdom should be of interest to concerned readers.” —Library Journal

"A fascinating and detailed study that intertwines history, politics, technology and sociology, addressing a subject that is crucial to every living person."—Bloomberg.com, "Favorite Summer Reads" roundup

"Let There Be Water is an important work of non-fiction, a story that needs to be told. There are lessons in here for everyone." —Former U.S. Senator Mark L. Pryor

“In the last 50 years, one place has taken water scarcity and turned it into water abundance—Israel. The Israelis did it with science, skill, and by thinking 50 years ahead. Seth M. Siegel’s book Let There Be Waterpieces together the surprising story of how Israel made itself into a ‘water superpower’ with clarity, with verve, and most important, with a sense of hope for everyone else facing water problems.” —Charles Fishman, New York Times bestselling author of The Big Thirst: The secret life & turbulent future of water

“Capturing Israel’s revolution from thirsting wasteland to thriving wellspring, Seth M. Siegel meticulously traces a fledgling nation’s quest to emerge as an international “water superpower,” in his new book Let There Be Water: Israel’s Solution for a Water- Starved World.” —The Jerusalem Post

“Israel’s determination to create water security is a half-century-long lesson in the liberating economic power of smart water, and a vivid illustration that scarcity doesn’t need to lead to deprivation. It can often drive exactly the opposite: innovation and even abundance.” —Strategy + Business

“Israel’s determination to create water security is a half-century-long lesson in the liberating economic power of smart water, and a vivid illustration that scarcity doesn’t need to lead to deprivation. It can often drive exactly the opposite: innovation and even abundance.” —American Associates, Ben-Gurion University’ Impact magazine

“This excellent, well-researched book enumerates the numerous 'bullets' Israel fired in its successful quest for water independence. Additionally, it offers the lessons learned in Israel as models for the world as climate change and population growth continue to stress the global supply of fresh water.” —San Diego Jewish Book World

“A fact-filled and wholly fascinating account of the Jewish homeland’s ways with water.” —Jewish Journal.com

"This smart, engaging, and extremely feel-good book tells one of the stories that best illustrates how Israel consistently turns crises into opportunities and challenges into victories...Siegel’s accessible handling of technological issues, his focus on key individuals inside and outside of government, and his boundless enthusiasm for Israel’s accomplishments and international leadership make Let There Be Water a highly appealing read." —Jewish Book Council

"Let There Be Water will change the way you think about Israel. Don’t miss it." —Lloyd Goldman, American Associates Ben-Gurion University of the Negev President