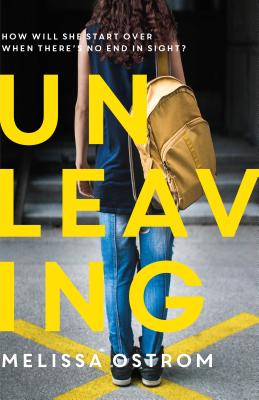 "For fans of Laurie Halse Anderson’s Speak..."--Voices of Youth Advocates

In a book that is both urgent and timely, Melissa Ostrom explores the intricacies of shame and victim-blaming that accompany the aftermath of assault.

After surviving an assault at an off-campus party, nineteen-year-old Maggie is escaping her college town, and, because her reporting the crime has led to the expulsion of some popular athletes, many people—in particular, the outraged Tigers fans—are happy to see her go.

Maggie moves in with her Aunt Wren, a sculptor who lives in an isolated cabin bordered by nothing but woods and water. Maggie wants to forget, heal, and hide, but her aunt’s place harbors secrets and situations that complicate the plan. Worse, the trauma Maggie hoped to leave behind has followed her, haunting her in ways she can’t control, including flashbacks, insomnia and a sense of panic. Her troubles intensify when she begins to receive messages from another student who has survived a rape on her old campus. Just when Maggie musters the courage to answer her emails, the young woman goes silent.

Melissa Ostrom teaches English literature at Genesee Community College in Batavia, New York. Her short fiction has been published in literary magazines, and nominated for a Pushcart Prize. The Beloved Wild is her YA debut. She lives in Batavia, New York, with her family.

"Ostrom tackles a painful topic with sensitivity and care. Maggie is a compelling character, and readers will find themselves invested in her well-being and recovery. The secondary characters also feel like real, complex human beings, and the setting is richly detailed and gives the novel a strong sense of place. This is a great recommendation for fans of Laurie Halse Anderson’s Speak or for readers who enjoy books that deal with difficult real-world topics."--VOYA

"Ostrom's sensitive treatment of a timely subject is a welcome addition to novels about rape and its
aftermath. ...[T]he novel is full of people we recognize and care about. If the ending feels almost too strong and hopeful to be real, it will be a true comfort to those who have had similar experiences and need to see a way past their current pain."--Booklist magazine

"A love letter to healing and moving on after a traumatic experience."--Forever YA