The Names of the Stars: A Life in the Wilds (Paperback) 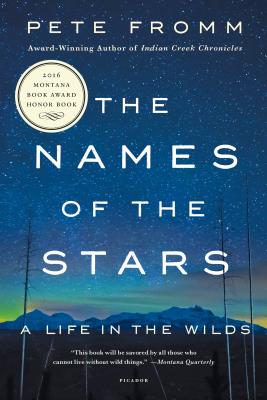 From the Author of Indian Creek Chronicles and the Winner of Five PNBA Awards, Pete Fromm’s New Memoir Sees His Return to the Wilderness to Explore a Life Lived in the Wilds.

Twenty-five years after his beloved memoir Indian Creek Chronicles, Pete Fromm was asked to return to the wilderness to babysit more fish eggs. No longer a footloose twenty-year-old, at forty-five, he was the father of two young sons. He left again, alone, straight into the heart of Montana’s Bob Marshall Wilderness, walking a daily ten-mile loop to his fish eggs through deer and elk and the highest density of grizzly bears in the lower forty-eight states.

The Names of the Stars is a trek through a life lived at its edges. From loon calls echoing across Northwood lakes to the grim realities of lifeguarding in the Nevada desert, through the isolation of Indian Creek and years spent running the Snake and Rio Grande as a river ranger, Pete seeks out the source of his passion for wildness, while exploring fatherhood and mortality and all the costs, risks, and rewards of life lived on its own terms.

PETE FROMM is a five time winner of the Pacific Northwest Booksellers Award for his novels If Not For This, As Cool as I Am, and How All This Started, his story collection Dry Rain, and the memoir Indian Creek Chronicles. The film of As Cool as I Am was released in 2013. He is also the author of several other story collections and has published over two hundred stories in magazines. He is on the faculty of Oregon’s Pacific University’s Low-Residency MFA Program and lives in Montana. His second memoir The Names of the Stars: A Life in the Wilds was named an Honor Book in the 2016 Montana Book Awards.

“Pete Fromm may crave solitude but he’s delightful company on the page. “The Names of the Stars” is an inspiring book brimming with wilderness adventures and executed with a pleasing mix of action, observation and rumination. In Fromm’s hands, a violent rainstorm reads like a transcendent gift and a face-to-face bear encounter like good comedy. I finished his memoir admiring not only his lucid prose but the wild life he’s chosen.” – Jim Lynch, author of Before the Wind

“With The Names of the Stars, Pete Fromm’s tough, supple, and lyrical prose shows, once again, the depth of his wisdom and the size of his heart. As a reflection on the natural world, which seems so remote to so many of us, there is much to learn; as an honest memoir of a man at the plumb-center of his life, there is much to recognize. Fromm’s return from a Life in the Wilds has in no way tamed his talent.” – Lance Weller, author of Wilderness

"Fromm's finely tuned reflections on this small but fully inhabited piece of the backwoods make this an adventure worth savoring." – Kirkus Reviews on The Names of the Stars

"[Fromm is] an excellent observer of the woods and wildlife around him, but he's perhaps even better at chronicling the feeling of being alone in the wilderness... His humor and honesty about the push and pull between solitude and togetherness and the mysterious way that both experiences magnify the other, make Stars a compelling walk through the woods." — The Montana Standard

"The Names of the Stars is a beautiful tribute to that urgent, visceral feeling that means we are still alive in this wild, wild world. This book will be savored by all those who cannot live without wild things."—Montana Quarterly

"[The Names of the Stars] is both triumphant and melancholy, the realization that you might be able to have everything you want, but not always at the same time. The Names of the Stars is a coming-of-age book for adults; it is a tightrope walk between holding on to who you are and letting go a little for something you love even more." —Kenyon Review

"Like his first memoir, The Names of the Stars is infused with Fromm’s exuberant passion for the natural world,his deep attention to the pulse and mystery that surrounds him." —Lively Times

"Although Pete Fromm’s new memoir, The Names of the Stars, is set in a place familiar to the author — a burlychunk of Montana wilderness — its narrative captures him at a point in life that contrasts with the youthful whimsy of his only other memoir, Indian Creek Chronicles.... [Fromm] has sharpened his craft as a writer" —Flathead Beacon

“Honest, lyrical, and full of a kind of an ineffable wonder. Anyone who has ever loved a place truly will surely love this book.” —Pam Houston on Indian Creek Chronicles

"Pete Fromm is a talent to watch."—Ivan Doig

"I read Pete Fromm with admiration for the vigor of his well-made writing and for his generous heart." – Tom McGuane