The Hunting of Hillary: The Forty-Year Campaign to Destroy Hillary Clinton (Hardcover) 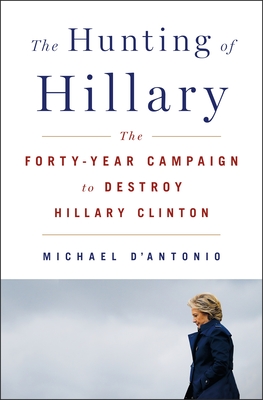 The Hunting of Hillary: The Forty-Year Campaign to Destroy Hillary Clinton (Hardcover)

The Hunting of Hillary traces how an entire industry of hate, lies, and fear was created to persecute Hillary Clinton for decades and profit from it.

In The Hunting of Hillary, Pulitzer prize winning political reporter Michael D’Antonio details the years of lies and insults heaped upon Hillary Clinton as she pursued a life devoted to politics and policy. The worst took the form of sexism and misogyny, much of it barely disguised.

A pioneer for women, Clinton was burdened in ways no man ever was. Defined by a right-wing conspiracy, she couldn’t declare what was happening lest she be cast as weak and whiny. Nevertheless, she persisted and wouldn't let them define her. As The Hunting of Hillary makes clear, her achievements have been all the more remarkable for the unique opposition she encountered. The 2016 presidential election can only be understood in the context of the primal and primitive response of those who just couldn’t imagine that a woman might lead.

For those who seek to understand the experience of the most accomplished woman in American politics, The Hunting of Hillary offers insight. For those who recognized what happened to her, it offers affirmation. And for those who hope to carry Clinton’s work into the future, it offers inspiration and instruction.

As part of a team of journalists from Newsday, MICHAEL D'ANTONIO won the Pulitzer Prize for his reporting before going on to write many acclaimed books, including Atomic Harvest, The State Boys Rebellion, and The Truth About Trump. He has also written for Esquire, The New York Times Magazine, and Sports Illustrated. He lives in New York.

“[D'Antonio] is a fluid writer, responsible summarizer and diligent researcher. This volume is a comprehensive history of the way right-wing attacks have both replicated and morphed over the decades, and across technologies.... But the book is most successful as a work within the terms of its chosen genre: Clinton defense. Just as the Clinton prosecution — in the manner of Edward Klein and Peter Schweizer — is a recognizable literary category (one to which D’Antonio rightly draws critical attention), so is Clinton defense.”
—The New York Times Book Review

"His compelling examination of the 'vast, right-wing conspiracy' to take down the esteemed former first lady and secretary of state is immaculately compiled... People on both sides of the aisle tire of being asked to confront this ugly history, but D’Antonio’s stirring account demands that we consider it further, especially now."
—Ms. Magazine

"I love this book. It is a thorough and clear-eyed analysis of how a Midwest, Methodist Goldwater Girl became the most vilified woman in America. There really was a right-wing conspiracy; sometimes vast, sometimes half-assed. Michael D’Antonio gives us a riveting account of the decades-long effort to tear down the woman who has been named Gallup’s Most Admired Woman more than anyone else. Essential reading."
—Paul Begala, former advisor to President Bill Clinton

"Still, just like the author's previous books, this one is thoroughly researched, clearly written, and often incisive. Hillary lovers will love it; Hillary haters will hate it."
—Kirkus Reviews

"This galvanizing exposé will stand as a key resource in the study of sexism and politics."
—Booklist, starred review