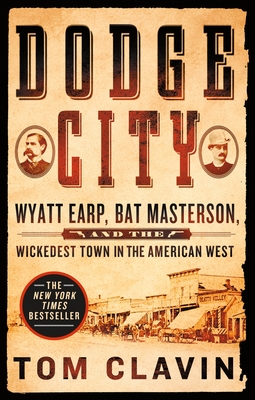 Now in paperback, the New York Times bestselling story of the taming of the Wild West, set in Dodge City, the most depraved and criminal town in the nation.

Dodge City, Kansas, is a place of legend. The town that started as a small military site exploded with the coming of the railroad, cattle drives, eager miners, settlers, and various entrepreneurs passing through to populate the expanding West. Before long, Dodge City’s streets were lined with saloons and brothels and its populace was thick with gunmen, horse thieves, and desperadoes of every sort. By the 1870s, Dodge City was known as the most violent and turbulent town in the West.

Enter Wyatt Earp and Bat Masterson. Young and largely self-trained men, the lawmen led the effort that established frontier justice and the rule of law in the American West, and did it in the wickedest place in the United States. When they moved on, Wyatt to Tombstone and Bat to Colorado, a tamed Dodge was left in the hands of Jim Masterson. But before long Wyatt and Bat, each having had a lawman brother killed, returned to that threatened western Kansas town to team up to restore order again in what became known as the Dodge City War before riding off into the sunset.

#1 New York Times bestselling author Tom Clavin's Dodge City tells the true story of their friendship, romances, gunfights, and adventures, along with the remarkable cast of characters they encountered along the way (including Wild Bill Hickock, Jesse James, Doc Holliday, Buffalo Bill Cody, John Wesley Hardin, Billy the Kid, and Theodore Roosevelt) that has gone largely untold—lost in the haze of Hollywood films and western fiction, until now.

TOM CLAVIN is a #1 New York Times bestselling author and has worked as a newspaper editor, magazine writer, TV and radio commentator, and a reporter for The New York Times. He has received awards from the Society of Professional Journalists, Marine Corps Heritage Foundation, and National Newspaper Association. His books include the bestselling Frontier Lawmen trilogy—Wild Bill, Dodge City, and Tombstone—and Blood and Treasure with Bob Drury. He lives in Sag Harbor, NY.

"Absorbing. . . . Fun and revealing all the way through. . . . Mr. Clavin gives Earp his due, but one of the virtues of his book is the welcome light it shines on its other protagonist, Bat Masterson, who comes across as much more interesting, human and fun." —The Wall Street Journal

"Two of the most fabled lawmen of the American West's fascinating careers are brought to life in Tom Clavin’s Dodge City." —New York Post

"A dramatic history of the West and the late 19th century that focuses on Wyatt Earp and Bat Masterson who were fast friends." —Bill O'Reilly

"Thorough, compelling and entertaining. . . . Clavin sprinkles in fascinating tidbits about life and culture in the Old West. . . . In Dodge City, Clavin vividly re-creates a time, a town and an era that it seems incomprehensible occurred less than 150 years ago. In it, he provides a reality check to the countless books, TV shows and movies about the Old West." —Houston Press

"Clavin tells a lively tale that’s both entertaining and informative, with plenty of action and little-known information to keep a reader around. . . . Fans of Western U.S. history or lovers of Larry McMurtry novels should covet this book; it’s everything you want it to be." —LaCrosse Tribune

"Offers a sweeping and often riveting account of the personalities and exploits of both men whose paths repeatedly crossed as the post-Civil War frontier moved westward. . . . This is an enjoyable saga that will appeal to both Western aficionados and general readers." —Booklist

"Clavin’s book brims with a colorful collection of real outlaws, sex workers, gamblers, and chorus dancers whose personalities, deeds, and even nicknames help readers understand why the Western legend entranced the nation in the first place. To know the history of Dodge City is to understand how the West was won, and this history is often just as captivating and strange as the legends that have supplanted it." —Publishers Weekly

"An extraordinary account of the iconic Wild West town of Dodge City, KS. . . . Clavin brings true personality to a severe Earp and the affable but steady-nerved Masterson during their roles in taming the wildest excesses of the Western frontier." —Library Journal

"The author paints a lively portrait of the town and its denizens, particularly those well-known enforcers. Along the way, he reveals a few lesser-known aspects of their characters . . . . A must-have for buffs." —Kirkus Reviews

"Tales of the Old West seem to improve with age. . . . [Clavin] brings into sharp focus stories that long ago acquired the sepia tone of antiquity. . . . Clavin’s storytelling skills shine as he chronicles the personal histories of the now-mythical pair, tracing the years of their reign in the West and providing an intriguing look at their comradeship. . . . Clavin’s bold narrative of life in a nation still coming of age provides a shot of good old-fashioned escapism. . . . [A] rip-roarin’ read." —BookPage

"Tom Clavin's Dodge City is a lesson in historical reporting, exhaustively researched and enthusiastically written with all the page-turning drive of a modern thriller. He's swept aside a century of cheesy myth to excavate the far more fascinating reality that lay beneath. In his hands, Wyatt Earp, Bat Masterson, James Butler Hickok, and that salty perennial Doc Holliday rise from their graves to strut across a raw frontier smelling of fresh-sawn pine, buffalo guts, and human blood." —Loren D. Estleman, author of Cape Hell

"Tom Clavin has produced a sharp picture of the brief but vivid culture of the 19th century cattle towns." —Larry McMurtry, bestselling author of Lonesome Dove and Comanche Moon

"I loved Clavin’s The Heart of Everything That Is, so I already knew I was in the hands of a gifted storyteller with his new history of the American West. But, wow! Dodge City crackles from the start. Replete with rich characters and a narrative that’s faster than Bat Masterson, Clavin has surpassed even himself." —Neal Bascomb, New York Times bestselling author of The Winter Fortress and Hunting Eichmann

"In a time when understanding America's real frontier past has never been more crucial, Tom Clavin's Dodge City cuts through popular mythology and offers both clarity and fine entertainment - in other words, it's a book that anyone interested in Western history needs to read." —Jeff Guinn, author of the New York Times bestseller The Last Gunfight