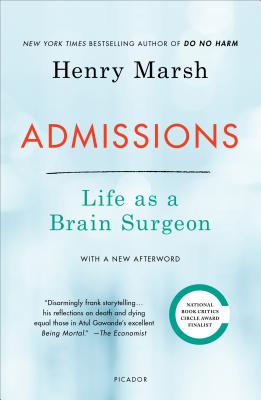 “Marsh has retired, which means he’s taking a thorough inventory of his life. His reflections and recollections make Admissions an even more introspective memoir than his first, if such a thing is possible.” —The New York Times

"Disarmingly frank storytelling...his reflections on death and dying equal those in Atul Gawande's excellent Being Mortal." —The Economist

Henry Marsh has spent a lifetime operating on the surgical frontline. There have been exhilarating highs and devastating lows, but his love for the practice of neurosurgery has never wavered.

Following the publication of his celebrated New York Times bestseller Do No Harm, Marsh retired from his full-time job in England to work pro bono in Ukraine and Nepal. In Admissions he describes the difficulties of working in these troubled, impoverished countries and the further insights it has given him into the practice of medicine.

Marsh also faces up to the burden of responsibility that can come with trying to reduce human suffering. Unearthing memories of his early days as a medical student, and the experiences that shaped him as a young surgeon, he explores the difficulties of a profession that deals in probabilities rather than certainties, and where the overwhelming urge to prolong life can come at a tragic cost for patients and those who love them.

Reflecting on what forty years of handling the human brain has taught him, Marsh finds a different purpose in life as he approaches the end of his professional career and a fresh understanding of what matters to us all in the end.

HENRY MARSH studied medicine at the Royal Free Hospital in London, became a Fellow of the Royal College of Surgeons in 1984 and was appointed Consultant Neurosurgeon at Atkinson Morley's/St George's Hospital in London in 1987. He has been the subject of two documentary films, Your Life in Their Hands, which won the Royal Television Society Gold Medal, and The English Surgeon, which won an Emmy, and is the author of the New York Times bestselling memoir Do No Harm and NBCC finalist Admissions. He was made a CBE in 2010.

“Marsh has retired, which means he’s taking a thorough inventory of his life. His reflections and recollections make Admissions an even more introspective memoir than his first, if such a thing is possible.” —The New York Times

"Consistently entertaining...Honesty is abundantly apparent here—a quality as rare and commendable in elite surgeons as one suspects it is in memoirists." —The Guardian

"It feels like a privilege to spend time with Marsh, an exemplary person with lambent emotions whose fearsome skills and hidden fears are a reminder of how exultant, sad, ardent, and swift life really is." —The New Yorker

"His descriptions of his work there demonstrate again his gift with both scalpel and pen. In vivid prose, he captures the terrifying risks he faces with each cut, each decision." —The Washington Post
“Admissions is wandering and ruminative.” —New York Times

"Sensational ... Marsh is curmudgeonly, unflinching, clinical, competitive, often contemptuous and consistently curious. In Admissions he scrubs up just as well the second time around and continues to revel in his joyous candour." —The Sunday Times

"Marsh is, given his profession, a surprisingly emotional man, likably so. His account of his younger self that threads through this compulsive book is a Bildungsroman in itself. He is also a fine writer and storyteller, and a nuanced observer." —Tim Adams, Observer

"Do No Harm, candid and tender, was one of the most powerful books written by a doctor ... His follow-up book does not disappoint. The maverick is back, even more blunt and irascible, with tales of thrilling, high-wire operations at medicine's unconquered frontier, woven through with personal memoir ... Marsh in full spate is quite magnificent . . . a master of tar-black, deadpan humour." —Melanie Reid, The Times

“Henry Marsh, a neurosurgeon for 30 years, is in the front ranks. This thoughtful account (his second, after Do No Harm; W&N, 2014) charting retirement and surgical work in Nepal and Ukraine brims with insights - not only on the fraught nexus of scalpel and brain, but on the complexities of ageing and the pleasures of beekeeping, tree-planting and carpentry.” —Barbara Kiser, Nature

“I particularly relished his descriptions of the anatomy of the brain itself, as well as his can-do accounts of freeing cancerous masses from their baroque architecture - but I enjoyed (if this is the correct word) still more his willingness to delve as fearlessly into his own, troubled being ... accounts of highly undoctorly behaviour that nonetheless confirms Marsh as the man I would most like to have prying open my skull. Perhaps most disarming of all is Marsh's frankness about his own fears of growing older and dying ... Should be distributed to every care home in Britain.” —Will Self, New Statesman

"Superb...a eulogy to surgery and a study of living. I didn't want this book to end. Henry Marsh is part of a growing canon of superb modern medical writers . . . whose storytelling and prose are transportative ... His timing is also impeccable ... His sentences, too, feel like works of the finest craftmanship, made with the love that goes into both his woodwork and surgery." —Jessamy Calkin, Daily Telegraph

"Admissions is a humbling read, in which neurosurgeon Henry Marsh shares fascinating facts learnt during his 40-year career as a brain surgeon. He has a deep humanity that resonates throughout." —Good Housekeeping

"An enthralling book, unputdownable ... It is an exhilarating, even thrilling read, a glimpse into a world we hope we may never have to enter." —The Arts Desk

"A truly extraordinary account. Henry Marsh's honesty and simple pragmatism underpin an amazing life of tantalising curiosity and contact with the most complex organ in the known universe. I often wonder about the physical structure of my own brain, about the bits that work and the bits that don't . . . and here is a man who has seen it, tweaked it, repaired it and yet still doesn't know it. It is tempting to try and find a magic in the mystery, but in fact this is a celebration of the magnificence of the brain." —Chris Packham

"Emerging from his own brusque acceptance of the inevitability of suffering and death is a deep compassion for his patients and their families ... The brain, with its two hemispheres is somehow both identical to and yet separate from the mind and the self ... It is fascinating to have it dissected, and with such psychological and clinical penetration, by someone for whom it is horribly untheortical and immediate ... Self-lacerating in his pursuit of the truth." —Jane O'Grady, Literary Review

"The reason for Marsh's success - besides the precision and elegance of his prose - is surely down to the fact that he grapples with matters of life, death and consciousness on a daily basis. And in a world where plain speaking is increasingly rare, Marsh tells it like it is ... Marsh's commitment to truth-telling makes this a genuinely humbling as well as fascinating read. And, like Do No Harm, it leaves a deep and permanent impression." —Stephanie Cross, The Lady

"A fascinating memoir ... Whether discussing his mistakes, or furious at politically inspired bureaucratic interference in what should be purely medical decisions from the UK to Ukraine via Nepal, Marsh paints a vivid picture of the pressures imposed on a surgeon who is quite literally at the cutting edge of modern medicine."
—William Hartston, Daily Express

"Disarmingly frank storytelling and...querulously, warty sort of heroism. He is, in spite of himself, hugely likeable...his reflections on death and dying equal those in Atul Gawande's excellent Being Mortal ... Admissions is more about the man than the surgeon, but it is excellent in its own right." —The Economist

"Marsh writes, "I had always loved my work, even though it was so often painful." That love is clear in Admissions. In spite of frequent dark musings, he takes joy in his craft, in his family, his friends and his cottage on the canal. He may have dying on his mind, but he still has much to do and much to give."- Shelf Awareness


Praise for Do No Harm

“A surprising page-turner ... Marsh’s prose is elegant and seasoned, with no false bravado.” —The Seattle Times

"Marsh delivers plenty of hospital drama. Yet what sticks with you are the moments when the lens flips and the field of view widens, and you realize that, in learning about the minutiae of neurosurgery, you’re gaining insight into life itself.” —The Wall Street Journal

“One of the best books ever about a life in medicine.” —Booklist (starred review)

“Neurosurgery has met its Boswell in Henry Marsh. Painfully honest about the mistakes that can 'wreck' a brain, exquisitely attuned to the tense and transient bond between doctor and patient, and hilariously impatient of hospital management, Marsh draws us deep into medicine's most difficult art and lifts our spirits. It's a superb achievement.” —Ian McEwan

“When a book opens like this: ‘I often have to cut into the brain and it is something I hate doing' – you can't let it go, you have to read on, don't you? Brain surgery, that's the most remote thing for me, I don't know anything about it, and as it is with everything I'm ignorant of, I trust completely the skills of those who practice it, and tend to forget the human element, which is failures, misunderstandings, mistakes, luck and bad luck, but also the non-professional, everyday life that they have. Do No Harm reveals all of this, in the midst of life-threatening situations, and that's one reason to read it; true honesty in an unexpected place.” —Karl Ove Knausgaard, Financial Times