No One Returns From the Enchanted Forest (Paperback) 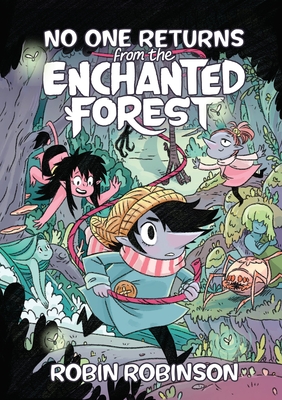 No One Returns From the Enchanted Forest (Paperback)

In this fantasy adventure graphic novel from debut author-illustrator Robin Robinson, a shy goblin must play the role of hero.

It’s Bix, Pella’s sister, who does the worrying for both of them. She’s the one, after all, who was tasked with keeping her sister safe after they lost their parents. But despite her fears and the very real dangers that lie ahead, Bix will do anything to protect her little sister—even walk into the Enchanted Forest with only a ball of yarn to guide them home.

They say no one returns from the Enchanted Forest. Will Bix and Pella be the first?

Robin Robinson is a huge nerd who can be found crashing comic conventions up and down the West Coast with a booth full of colorful artwork. No One Returns from the Enchanted Forest is Robinson’s author-illustrator debut, after drawing The City on the Other Side with writer Mairghread Scott. Robin lives in a house that looks like someone had a Halloween party in a library and forgot to clean up afterwards. The pet rats only add to this impression.

"This graphic novel makes full use of skillful interplay between text and illustration, mirroring feelings of insignificance with expanses of space, and Robinson demonstrates creative exploration of panel size and shape... Contemplations of forgiveness and redemption add thoughtful layers to this fast-paced graphic novel."—The Bulletin of the Center for Children's Books

"With danger always lurking and illustrations that are full of movement, it’s easy to get quickly swept up into this tale and not want to leave. Enchanting indeed."—Kirkus

"In her debut author/illustrator comic, Robin Robinson weaves a compelling, adventurous tale set in a lushly drawn world... As I read, I was often reminded of the Hildafolk series and how this comic captures a similar natural environment, one that is wondrously inviting, yet fraught with danger." —No Flying No Tights