Mad Scenes and Exit Arias: The Death of the New York City Opera and the Future of Opera in America (Paperback) 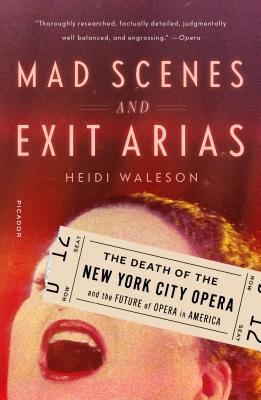 Mad Scenes and Exit Arias: The Death of the New York City Opera and the Future of Opera in America (Paperback)

From the Wall Street Journal's opera critic, a wide-ranging narrative history of how and why the New York City Opera went bankrupt—and what it means for the future of the arts

In October 2013, the arts world was rocked by the news that the New York City Opera—“the people’s opera”—had finally succumbed to financial hardship after 70 years in operation. The company had been a fixture on the national opera scene—as the populist antithesis of the grand Metropolitan Opera, a nurturing home for young American talent, and a place where new, lively ideas shook up a venerable art form. But NYCO’s demise represented more than the loss of a cherished organization: it was a harbinger of massive upheaval in the performing arts—and a warning about how cultural institutions would need to change in order to survive.

Drawing on extensive research and reporting, Heidi Waleson, one of the foremost American opera critics, recounts the history of this scrappy company and reveals how, from the beginning, it precariously balanced an ambitious artistic program on fragile financial supports. Waleson also looks forward and considers some better-managed, more visionary opera companies that have taken City Opera’s lessons to heart.

Above all, Mad Scenes and Exit Arias is a story of money, ego, changes in institutional identity, competing forces of populism and elitism, and the ongoing debate about the role of the arts in society. It serves as a detailed case study not only for an American arts organization, but also for the sustainability and management of nonprofit organizations across the country.

Heidi Waleson has been the opera critic of the Wall Street Journal for 25 years. In addition to her regular criticism, her work has also focused more broadly on the changing profiles of musical institutions, new models for opera presentation, and the broader significance of opera and culture. She is a faculty member of the Rubin Institute for Music Criticism at the San Francisco Conservatory of Music.

“An intricate whodunit that seeks to find out who murdered the New York City Opera . . . In describing the unraveling of this noble civic enterprise, Waleson gives us a vivid description of each death-defying crisis and a sharp portrait of the ever-changing cast of would-be saviors who somehow always failed in their mission.”
—Edward Sorel, The New York Times Book Review


“Heidi Waleson has written much more than the story of a beloved opera company’s demise—though she does that with verve, wit, a sharp journalistic eye, and deep critical wisdom. She chronicles a venerable art form undergoing a difficult but inevitable evolution, and you finish the book with an unexpected sense of hope.”
—Alex Ross, author of The Rest Is Noise


“In this richly informative chronicle of NYCO’s decline and fall, Waleson persuasively argues that what happened to City Opera (and, by extension, the Met) could happen to other opera companies as well.”
—Commentary


“Heidi Waleson has delivered a detailed account of the struggles of one of the nation’s most storied opera companies. She goes beneath the surface to examine the underlying social and demographic changes that have shaped New York’s cultural scene over the last half-century and explores essential issues of governance and leadership. It is the story of one organization, with lessons for all.”
—Marc A. Scorca, President and CEO, OPERA America


“Heidi Waleson gives a vivid account of the twilight and fall of NYCO—an almost operatic fable of oversized egos and misplaced trust—and shows what the demise of the original ‘People’s Opera’ may mean for the future of opera and classical music. Truly, a cautionary tale. Her deft analysis and knowing grasp of the material make this essential reading for anyone who cares about opera.”
—Charles MacKay, former general director, the Santa Fe Opera


“Meticulously researched, Mad Scenes and Exit Arias is both a gripping read and a cautionary tale for all lovers of opera and the arts in America today. Yet Heidi Waleson ends not with pessimism but optimism, about the bracing changes transforming American operatic life today.”
—John Rockwell, former arts critic of The New York Times and founding director of the Lincoln Center Festival


“Drawing on extensive research and reporting . . . Waleson’s in-depth study illustrates the challenges City Opera—and other opera houses—face in the 21st century as they seek to preserve tradition and innovate.”
—Publisher’s Weekly


“A thorough recounting of the tumultuous history of the New York City Opera [and] a cleareyed examination of the economic fragility of cultural institutions.”
—Kirkus Reviews


“Illuminating . . . engrossing . . . will be of extraordinary interest to anyone invested in the future of the performing arts.”
—Library Journal (starred review)