I Dream of Popo (Hardcover) 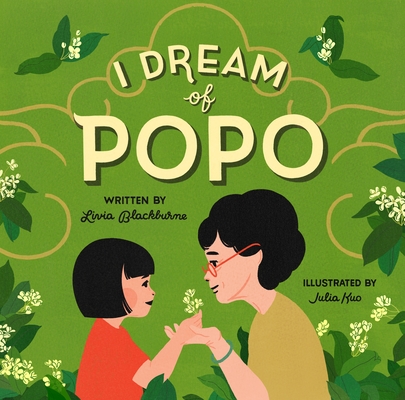 I Dream of Popo (Hardcover)

From New York Times bestselling author Livia Blackburne and illustrator Julia Kuo, here is I Dream of Popo. This delicate, emotionally rich picture book celebrates a special connection that crosses time zones and oceans as Popo and her granddaughter hold each other in their hearts forever.

I dream with Popo as she rocks me in her arms.
I wave at Popo before I board my flight.
I talk to Popo from across the sea.
I tell Popo about my adventures.

When a young girl and her family emigrate from Taiwan to America, she leaves behind her beloved popo, her grandmother. She misses her popo every day, but even if their visits are fleeting, their love is ever true and strong.

New York Times–bestselling author Livia Blackburne wrote her first novel while researching the neuroscience of reading at the Massachusetts Institute of Technology. Since then, she’s switched to full time writing, which also involves getting into people’s heads but without the help of a three tesla MRI scanner. She is the author of the Midnight Thief and Rosemarked duologies. Livia was born in Taipei, Taiwan and moved to Albuquerque, NM when she was five. After a twelve year stint at Harvard and MIT, where she earned a AB in Biochemical Sciences and a PhD in cognitive neuroscience, she moved to Los Angeles, where she now lives with her husband and daughter. In her free time, Livia likes to karaoke, dance, and dabble in martial arts.

Julia Kuo is a Taiwanese-American illustrator who has worked with The New York Times, Google, and Science Friday. Julia has taught illustration courses at Columbia College Chicago and at her alma mater, Washington University in St. Louis. She is the illustrator of Drawing Leaves and Trees: Observing and Sketching the Natural World, I Dream of Popo written by Livia Blackburne, Katrina Goldsaito's The Sound of Silence, Roni Schotter's Go, Little Green Truck!, Melissa Gilbert's Daisy and Josephine, 20 Ways to Draw a Dress, 20 Ways to Draw a Cat, and Everyone Eats.

“Readers will connect with this visual story on various levels or learn something new; possibly both. #Ownvoices tributes to childhood memories of home: It is as much an emotional space as a physical place.” —Kirkus Reviews, starred review

"This modern tale beautifully explores what it’s like for a child to move across the globe and the toll that family separations can take.” —Booklist, starred review

“A tender, emotionally resonant tale of a girl who must say goodbye to Popo, her beloved grandmother, when her family emigrates from Taiwan to the United States.” —The Buffalo News

“A beautiful story to share between parents or grandparents and the children they love.” —The Daily Press

“A lyrical and heartfelt tribute to the power of love across geography and generations.” —Bookpage

“Rich with emotions, cultural traditions, and enchanting illustrations, this book celebrates the love between a child and grandparent.” —Andrea Wang, for Parents Magazine

"Blackburne’s nuanced narrative and Kuo’s eye-catchingly hued illustrations bring readers on a heartwarming journey, providing an opportunity to explore and discuss the themes of identity, roots, connection, and emigration." —The Horn Book