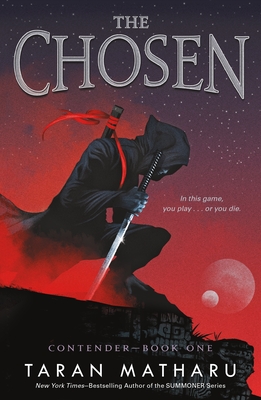 This is book number 1 in the Contender series.

The Chosen introduces the first book in the Contender trilogy, an epic young adult fantasy from Taran Matharu, author of the New York Times–bestselling Summoner series.

Throughout history, people have vanished with no explanation. A group of teenagers are about to discover why.

Cade is settling into a new boarding school, contemplating his future, when he finds himself transported to another realm. He soon discovers their new world is populated with lost remnants from the past: prehistoric creatures, ancient relics, and stranger still—people. Overwhelmed by his new surroundings, Cade has little time to adjust, for soon he and his fellow classmates are forced to become contenders in a brutal game, controlled by mysterious overlords.

But who are these beings and why did they choose these teens? Cade must prepare for battle . . . because hiding is not an option. Fans of fantasy and LitRPG will welcome this new character and world from the author of the Summoner series.

Taran Matharu is the author of the Contender trilogy and the New York Times–bestselling Summoner series: The Novice (Book One), The Inquisition (Book Two), The Battlemage (Book Three), The Outcast (the prequel), and The Summoner's Handbook; the series has been compared to the Harry Potter and Lord of the Rings series. Taran Matharu lives in London.

Praise for The Novice:

“This plot-focused fantasy adventure will be a satisfying read for a wide age range of readers, especially fans of role-playing games and Christopher Paolini.” —VOYA

“Taran Matharu . . . racked up more than a million reads for his first novel, Summoner, in only four months.” —NBCnews.com

Praise for The Inquisition:

Praise for The Battlemage: