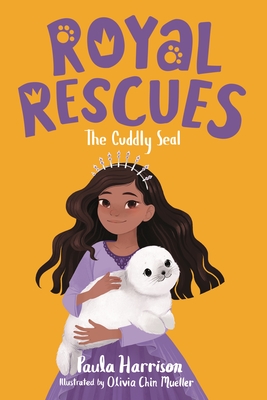 Paula Harrison's Royal Rescues #5: The Cuddly Seal, illustrated by Olivia Chin Mueller, is the fifth book in this sweet illustrated chapter book series about a pet-loving princess who finds and helps animals in trouble—even if it's against the rules!

"A royal palace is no place for pets, Beatrice!" says her father, King George.

But Princess Bea won’t let royal rules stop her from helping animals in need. While exploring Silver Rock Bay, Bea finds a little seal pup alone on some rocks. Can she and her friend Keira reunite the baby seal with its mother before the big storm comes?

Paula Harrison is the author of The Rescue Princesses series, The Secret Rescuers series and the Royal Rescues series. She wanted to be a writer from a young age but spent many happy years being a primary school teacher first. She finds inspiration in lots of things from cloud shapes to snippets of conversation. She loves sandy beaches and eating popcorn. She lives with her husband and children in Buckinghamshire, which is nowhere near the sea. Whenever possible, she packs her family into the car and journeys far and wide to find a sandy beach where she can paddle in the waves.

Olivia Chin Mueller grew up in a small town in Connecticut, USA, and now lives in Rhode Island. She attended the Rhode Island School of Design and graduated with a BFA in 2014. When she's not illustrating books like Mirabel's Missing Valentine (Janet Lawler) and Royal Sweets (Helen Perelman), Olivia loves playing with her cats, sewing and felting, and collecting cute toys and nail polish.

"A strong addition to a series that triumphs in showing positivity, emphasizing animal care, and encouraging helping those in need." —School Library Journal on The Snowy Reindeer

"Young readers who enjoy royalty or animal-based series, such as Daisy Meadows’s “Rainbow Magic” or Harrison’s other series, will devour this newest princess-and-pet offering. Frequent illustrations dot the chapters, and text is large and manageable for early ­chapter readers." —School Library Journal on The Naughty Kitten

“A fun animal series aimed at newly independent readers, highly illustrated throughout, from the author of the bestselling Rescue Princesses series.” —The Bookseller

“This is a lovely story about taking responsibility and what it’s really like to have a pet.” —Lily and the Fae