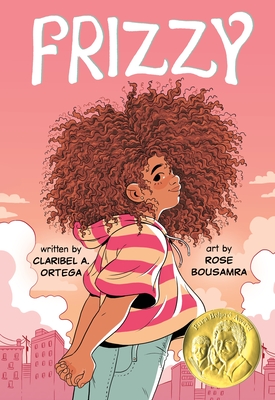 “An incredible graphic novel debut! A Dominican American family comes to terms with grief and inherited racist ideas about beauty. Marlene questions hair politics, grows into her authentic self, and brings others along with her.”
— Dawn Stahl, Hartfield Book Company, Monticello, IL

New York Times-bestselling author Claribel A. Ortega and star debut artist Rose Bousamra's Frizzy is about Marlene, a young Dominican girl whose greatest enemy is the hair salon! Through her struggles and triumphs, this heartwarming and gorgeous middle-grade graphic novel shows the radical power of accepting yourself as you are, frizzy curls and all.

Marlene loves three things: books, her cool Tía Ruby and hanging out with her best friend Camila. But according to her mother, Paola, the only thing she needs to focus on is school and "growing up." That means straightening her hair every weekend so she could have "presentable", "good hair".

But Marlene hates being in the salon and doesn't understand why her curls are not considered pretty by those around her. With a few hiccups, a dash of embarrassment, and the much-needed help of Camila and Tia Ruby—she slowly starts a journey to learn to appreciate and proudly wear her curly hair.

New York Times Bestselling and award-winning author Claribel A. Ortega went from journalism student, editing her classmates' often hilarious ads and ramblings on the back page of SUNY Purchase’s Independent Newspaper, to a small-town reporter, where she enjoyed going to board of ed meetings and texting the town mayors about the line at Starbucks.

Today when she’s not busy turning her obsession with eighties pop culture, magic, and video games into books, she's co-hosting the hilarious and chaotic Bad Author Book Club podcast or helping authors navigate publishing with her consulting business GifGrrl. She is a Marvel contributor and has been featured on Buzzfeed, Bustle, Good Morning America, and Deadline.

Claribel’s debut middle grade novel Ghost Squad is a New York Times Bestseller and is being made into a feature film. Ghost Squad won Best in Middle Grade at the 2021 Ignyte Awards, was a Goodreads Choice Award finalist, and an International Latino book awards honorary mention for 2020. Her other titles include Witchlings (Scholastic) and the graphic novel Frizzy (First Second), winner of the 2023 Pura Belpré Award for Children's Text, with Rose Bousamra.

Rose Bousamra is a freelance illustrator and comic creator born and based in Michigan. Frizzy (with Claribel A. Ortega), winner of the 2023 Pura Belpré Award for Children's Text, is their first graphic novel, with their solo debut graphic novel Gutless also being published with First Second. When they're not making or reading comics they love baking sweets and playing fantasy video games.

"In the creators’ graphic novel debut, themes of anti-Blackness, colorism, and self-acceptance are explored with ­nuance and honesty. The subject of internalized racism is discussed in a way that will resonate with kids and families grappling with it for the first time." —School Library Journal, starred review

"Frizzy is an intimate mother-daughter drama that sensitively explores the concept of so-called “good hair,” a manifestation of racist beauty standards, as well as how such internalized anti-Blackness gets passed down through generations. Eager to value her unique identity, Marlene eventually learns how to advocate for herself, and her journey to proud self-acceptance is nothing short of joyful." —BookPage, starred review

"Frizzy touches upon the impact that hurtful beauty standards can have on children and how they can be perpetuated across generations, and an educational conversation on the connection between these beauty standards and anti-Blackness is neatly woven into the story." —Booklist

“A wonderful tale about what it truly means to have good hair . . . and a good heart.” —Varian Johnson, award-winning author of Twins

"I desperately wish I'd had a book like this when I was growing up. Frizzy is uplifting, affirming, and healing to all kids who love their curls. Curly hair power!" —Zoraida Córdova, award-winning author of Valentina Salazar Is Not a Monster Hunter

"Through warm, encouraging collaboration, creators Ortega and Bousamra underscore and celebrate the joys of being "beautiful in your own way." —Shelf Awareness