The Social Instinct: How Cooperation Shaped the World (Hardcover) 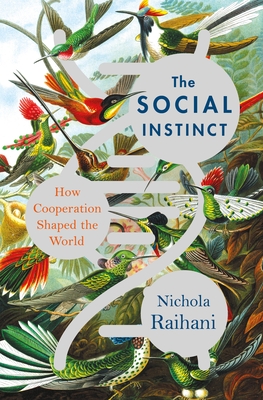 The Social Instinct: How Cooperation Shaped the World (Hardcover)

In the tradition of Richard Dawkins's The Selfish Gene, Nichola Raihani's The Social Instinct is a profound and engaging look at the hidden relationships underpinning human evolution, and why cooperation is key to our future survival.

Cooperation is the means by which life arose in the first place. It’s how we progressed through scale and complexity, from free-floating strands of genetic material, to nation states. But given what we know about the mechanisms of evolution, cooperation is also something of a puzzle. How does cooperation begin, when on a Darwinian level, all that the genes in your body care about is being passed on to the next generation? Why do meerkat colonies care for one another’s children? Why do babbler birds in the Kalahari form colonies in which only a single pair breeds? And how come some coral wrasse fish actually punish each other for harming fish from another species?

A biologist by training, Raihani looks at where and how collaborative behavior emerges throughout the animal kingdom, and what problems it solves. She reveals that the species that exhibit cooperative behavior–teaching, helping, grooming, and self-sacrifice–most similar to our own tend not to be other apes; they are birds, insects, and fish, occupying far more distant branches of the evolutionary tree. By understanding the problems they face, and how they cooperate to solve them, we can glimpse how human cooperation first evolved. And we can also understand what it is about the way we cooperate that has made humans so distinctive–and so successful.

Nichola Raihani is a Royal Society University Research Fellow and Professor in Evolution and Behaviour at UCL, where she leads the Social Evolution and Behaviour Lab. An evolutionary biologist by training, she won the 2018 Philip Leverhulme Prize in Psychology for her research achievements, and was elected Fellow of the Royal Society of Biology. She has also worked in the BBC Science Development Team, and appeared on several podcasts and radio shows, including BBC Radio 4’s “Hacking the Unconscious” and “Thought Cages.” She lives in London with her family.

“Raihani employs social, economic, and biological theories to argue that living organisms have evolved through teamwork, and she discusses downsides of humans’ social instinct—it can lead to conspiracy theories and confirmation bias. Colorful examples…bring things to life. This enriching survey should have broad appeal.” —Publishers Weekly

“In this captivating book, Raihani provides a compelling argument that cooperation is the secret of human success and yet has never been as crucial as it is now, during a global pandemic and with the threat of the climate crisis. I found this intriguing and beautifully written book hard to put down.” —Sarah-Jayne Blakemore, author of Inventing Ourselves: The Secret Life of the Teenage Brain

“The Social Instinct is surprising, thoughtful and, best of all, endlessly entertaining, examining the puzzle and power of co-operation from the decks of the HMS Bounty to the babbling birds of the Kalahari. Absolutely loved it.” —Will Storr, author of The Science of Storytelling

"A phenomenally important book. The story of why we humans evolved to become such a wonderfully cooperative, social species, and what that means for the world today. Raihani will change the way you think about ourselves.” —Lewis Dartnell, author of Origins: How the Earth Shaped Human History

“Cooperation is at the heart of our bodies, our societies and our ecosystem. Raihani's stunning book flips the selfish gene on its head, showing us not only how to better understand the world, but also how to change it.” —Matthew Cobb, author of The Idea of the Brain

“This is a glorious book, with an insight on every page. Above all it taught me that while our individual bodies and brains might reward comparison with our primate relatives, in understanding our social relations we would be much better off comparing the meerkat. And the naked mole-rat. And the bower bird. And the cleaner-fish.” —Rory Sutherland, author of Alchemy: The Surprising Power of Ideas that Don’t Make Sense

“A fascinating exploration of the ties that bind us from our smallest cell to our grandest society. Raihani reveals the deep evolutionary roots of cooperation, drawing on her own extensive scholarship in an entertaining and insightful new look at the risks and rewards of collaborating.” —Gaia Vince, author of Transcendence: How Humans Evolved Through Fire, Language, Beauty, and Time