Burning Down the House: How Libertarian Philosophy Was Corrupted by Delusion and Greed (Hardcover) 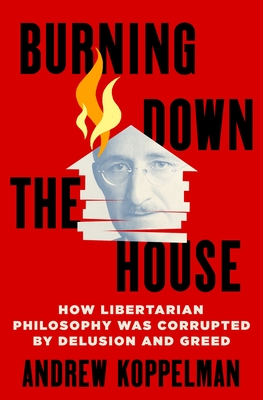 Burning Down the House: How Libertarian Philosophy Was Corrupted by Delusion and Greed (Hardcover)

A lively history of American libertarianism and its decay into dangerous fantasy.

In 2010 in South Fulton, Tennessee, each household paid the local fire department a yearly fee of $75.00. That year, Gene Cranick's house accidentally caught fire. But the fire department refused to come because Cranick had forgotten to pay his yearly fee, leaving his home in ashes. Observers across the political spectrum agreed—some with horror and some with enthusiasm—that this revealed the true face of libertarianism. But libertarianism did not always require callous indifference to the misfortunes of others.

Modern libertarianism began with Friedrich Hayek’s admirable corrective to the Depression-era vogue for central economic planning. It resisted oppressive state power. It showed how capitalism could improve life for everyone. Yet today, it's a toxic blend of anarchism, disdain for the weak, and rationalization for environmental catastrophe. Libertarians today accept new, radical arguments—which crumble under scrutiny—that justify dishonest business practices and Covid deniers who refuse to wear masks in the name of “freedom.”

Andrew Koppelman’s book traces libertarianism's evolution from Hayek’s moderate pro-market ideas to the romantic fabulism of Murray Rothbard, Robert Nozick, and Ayn Rand, and Charles Koch’s promotion of climate change denial. Burning Down the House is the definitive history of an ideological movement that has reshaped American politics.

ANDREW KOPPELMAN is an award-winning John Paul Stevens Professor of Law at Northwestern University. He is the author of Gay Rights vs. Religious Liberty? and The Tough Luck Constitution and the Assault on Health Care Reform. His work has appeared in USA Today, CNN.com, The New Republic, Salon, The Chicago Tribune, and Vox. He is a regular contributor to Balkinization, a leading blog in constitutional law.

“An absolutely indispensable guide to understanding the nature the modern Libertarian movement. Koppelman writes in the best tradition of fair-minded and deeply insightful historians, making his findings all the more unsettling. He shows how a near-Utopian vision of government-free humanity has evolved into a corrosive and ultrapowerful force in American politics today. This book is a wake-up call to anyone who cares about American democracy.”
—Christopher Leonard, author of the New York Times bestseller Kochland.


“Andrew Koppelman mounts an elegant and thorough criticism of the classical-liberalism-off-the-rails of people like Ayn Rand or Senator Rand Paul. Even we real classical liberals need to face up to his criticisms. Maybe, as he argues, the world needs more regulation and redistribution. Quantitatively speaking, I think not. But read the book, and get a lot smarter about the case pro and con.”
-Deirdre McCloskey, Distinguished Professor of Economics, History, English, and Communication, University of Illinois at Chicago

“It is an important contribution to philosophical debates about the nature and extent of the divide between classical liberalism and libertarianism. More important, it brings much needed clarification to public debates over the proper role of capitalism in a democratic society.”
-Samuel Freeman, Emeritus Avalon Professor in the Humanities, University of Pennsylvania

“Unlike other critics of libertarianism, Andrew Koppelman took the effort to understand it. The payoff is not just an erudite critique of certain strands of libertarianism, but an appreciation for what moderate Hayekian libertarianism has to teach both the left and the right.”
-David Bernstein, University Professor, Antonin Scalia Law School, George Mason University

“This treatise has the power to reach readers on both the right and the left.”
-Publishers Weekly