Is Rape a Crime?: A Memoir, an Investigation, and a Manifesto (CD-Audio) 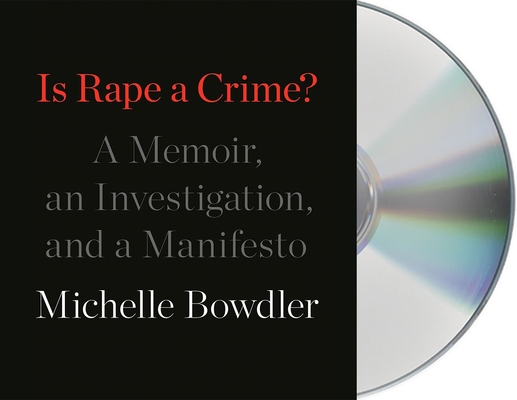 By Michelle Bowdler, Gabra Zackman (Read by)
Email or call for price & availability
Not Currently Available to Order

She Said meets Lucky in Michelle Bowdler's provocative debut, telling the story of her rape and recovery while interrogating why one of society's most serious crimes goes largely uninvestigated.
The crime of rape sizzles like a lightning strike. It pounces, flattens, destroys. A person stands whole, and in a moment of unexpected violence, that life, that body is gone.

Award-winning writer and public health executive Michelle Bowdler's memoir indicts how sexual violence has been addressed for decades in our society, asking whether rape is a crime given that it is the least reported major felony, least successfully prosecuted, and fewer than 3% of rapists ever spend a day in jail. Cases are closed before they are investigated and DNA evidence sits for years untested and disregarded.

Rape in this country is not treated as a crime of brutal violence but as a parlor game of he said / she said. It might be laughable if it didn’t work so much of the time.

Given all this, it seems fair to ask whether rape is actually a crime.

In 1984, the Boston Sexual Assault Unit was formed as a result of a series of break-ins and rapes that terrorized the city, of which Michelle’s own horrific rape was the last. Twenty years later, after a career of working with victims like herself, Michelle decides to find out what happened to her case and why she never heard from the police again after one brief interview.

Is Rape a Crime? is an expert blend of memoir and cultural investigation, Michelle's story is a rallying cry to reclaim our power and right our world.

“Urgent...an indictment of one of the most glaring contradictions of the US criminal justice system.” — Boston Globe

"Intimate, powerful...An urgent, necessary, stark exploration of 'one of the most horrific violations that can happen to a human being.'" — Kirkus

Michelle Bowdler is the Executive Director of Health & Wellness at Tufts University and, after graduating from the Harvard School of Public Health, has worked on social justice issues related to rape for over a decade. Is Rape a Crime? is her first book. She is a recipient of a 2017 Barbara Deming Memorial Award and has been a Fellow at Ragdale and the MacDowell Colony. Michelle’s writing has been published in the New York Times and her essays “Eventually You Tell Your Kids” and “Babelogue” were nominated for Pushcart Prizes.