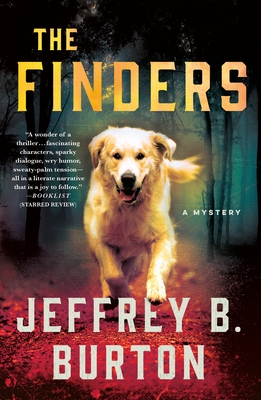 By Jeffrey B. Burton

This is book number 1 in the Mace Reid K-9 Mystery series.

Jeffrey B. Burton's The Finders is the beginning of a fast-paced new series featuring a heroic golden retriever cadaver dog named Vira and her handler, Mason Reid.

Mason "Mace" Reid lives on the outskirts of Chicago and specializes in human remains detection. He trains dogs to hunt for the dead. Reid’s coming off a difficult year—mourning the death of a beloved springer spaniel as well as the dissolution of his marriage. He adopts a rescue dog with a mysterious past—a golden retriever named Vira. And when Reid begins training Vira as a cadaver dog, he comes to realize just how special the newest addition to his family truly is…

Suddenly, Reid and his prize pupil find themselves hurled into a taxing murder case, which will push them to their very limits. Paired with determined Chicago Police Officer Kippy Gimm, Mace must put all his trust in Vira's abilities to thwart a serial killer who has now set his sights on Mace himself.

JEFFREY B. BURTON is the author of many novels including The Finders, The Chessman, and The Eulogist. He is an active member of Mystery Writers of America, International Thriller Writers and the Horror Writers Association and lives in St. Paul, Minnesota with his family.

"A wonder of a thriller, crammed to bursting with everything genre fans are pining for: fascinating characters, sparky dialogue, wry humor, sweaty-palm tension—all in a literate narrative that is a joy to follow...Vira and Mace, working as a pair, take on serial-killer everyman, who's been a spooky presence from the start and a vicious and fascinating one as the story builds to its climax. The confrontation surges for a good 50 pages and contains a few surprises for jaded genre fans who think they've seen it all. —Booklist (starred review)

"[A] suspenseful series launch. Burton offers the right balance of humor and seriousness, along with a lead whose love and understanding of dogs will endear him to many, not just dog people. Hopefully, Mace and Vira will be back soon." —Publishers Weekly

"All the elements are present for a fast-paced mystery, and THE FINDERS shows promise for many future adventures." —Bookreporter

"It’s a good tale, both warm and tense, with a twisty ending." —The Star Tribune