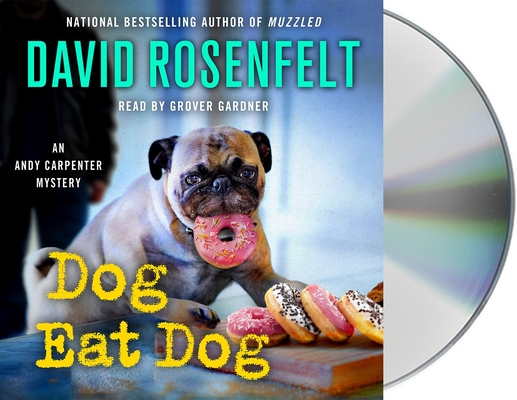 This is book number 23 in the An Andy Carpenter Novel series.

"The 22nd installment in the Andy Carpenter series is just as delightful and entertaining as the first, thanks in large part to Grover Gardner's narration." -- AudioFile Magazine

Lawyer Andy Carpenter and his golden retriever, Tara, work to free a man who risked it all to help a dog in need

Lawyer Andy Carpenter and his wife, Laurie, enjoy walking their dogs, Tara and Sebastian. By this point in their marriage, it’s routine. When out for one of their strolls, their simple ritual isn’t so simple anymore. Across the street, a man is mistreating his dog. Three things happen at once: Andy yells, Laurie runs to stop the abuse, and so does a closer passerby, who so thoroughly beats the owner that both are arrested when the cops arrive.

Andy scoops up the dog and takes him to the Tara Foundation, the dog rescue organization that’s always been his true passion. Meanwhile, at the police station, the passerby is identified as Matthew Jantzen, and he’s wanted for murder. Andy and Laurie are struck by the fact that Jantzen, a man on the run, would nevertheless intervene to help a dog, and decide to find out more.

Dog Eat Dog, the twenty-second installment in the Andy Carpenter series, features the charming cast of characters - old and new - that David Rosenfelt is known for and the dogs that accompany them.

"Narrator Grover Gardner returns to breathe life into listeners' favorite dog-loving lawyer...In his vivid portrayal of the wisecracking Andy, Gardner creates a sense of a cheerful reunion with the lawyer for longtime listeners and a warm greeting for newcomers." -- AudioFile Magazine on Muzzled, Earphones Award winner

"Listening to Grover Gardner narrating a David Rosenfelt novel is like sliding into favorite slippers at the end of a long day: One feels the joyful gratification of a perfect fit."—AudioFile Magazine on Bark of Night

Grover Gardner has recorded more than 650 audiobooks since beginning his career in 1981.  He's been named one of the "Best Voices of the Century" as well as a "Golden Voice" by AudioFile magazine.  Gardner has garnered over 20 AudioFile Earphones Awards and is the recipient of an Audio Publishers Association Audie Award, as well as a three-time finalist.  In 2005, Publishers Weekly deemed him "Audiobook Narrator of the Year."

Gardner has also narrated hundreds of audiobooks under the names Tom Parker and Alexander Adams.  Among his many titles are Marcus Sakey's At the City's Edge, as well as Star Wars: The Phantom Menace, Mark Twain's The Adventures of Tom Sawyer, and John Irving's The Cider House Rules.  Gardner studied Theater and Art History at Rollins College and received a Master's degree in Acting from George Washington University.  He lives in Oregon with his significant other and daughter.