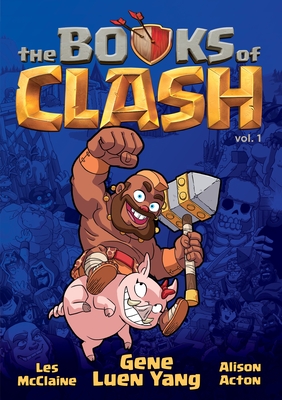 This is book number 1 in the Books of Clash series.

Based on Clash of Clans and Clash Royale and penned by superstar graphic novelist Gene Luen Yang, this first volume of this action-packed eight-volume series brings the characters from everyone's favorite mobile gaming sensation to life!

SEE! The illustrated exploits of one young Hog Rider and his trusted companion in an unpredictable tale of fantasy and adventure!

READ! Their journey from no-good warriors on the battlefield to true heroes of the Royal Arena!

BATTLE! When danger strikes the village of JazzyPickles and its colorful cast of characters in this heartwarming and hilarious graphic novel based on two of the world’s most popular video games.

In this epic new series set in the world of Clash of Clans and Clash Royale, experience a laugh-out-loud tale of friendship and fun!

Gene Luen Yang writes, and sometimes draws, comic books and graphic novels. He was named a National Ambassador for Young People’s Literature by the Library of Congress in 2016, and advocates for the importance of reading, especially reading diversely. His graphic novel American Born Chinese, a National Book Award finalist and Printz Award winner, has been adapted into a streaming series. His two-volume graphic novel Boxers & Saints won the LA Times Book Prize and was a National Book Award Finalist. His nonfiction graphic novel, Dragon Hoops, received an Eisner award and a Printz honor. His other comics work includes Secret Coders (with Mike Holmes), The Shadow Hero (with Sonny Liew), and Superman Smashes the Klan and the Avatar: The Last Airbender series (both with Gurihiru). In 2016, he was named a MacArthur Foundation Fellow.

Les McClaine decided he wanted to draw comics when he was eight years old and has been doing it ever since. He is the Eisner-nominated author of “Johnny Crossbones,” “Life With Leslie,” “Repeat Until Death,” and “Highway 13.” He has also illustrated numerous comics including “The Tick” and “The Middleman.” In 2008, “The Middleman” was made into a TV series for ABC Family. He lives in Portland, Oregon in a little yellow house with his wife Crystal and their cat Theodore.

Alison Acton is one half of Studio Dooomcat, comic and concept artists from Ottawa, Canada. Her background is traditional animation and she currently works from home as an illustrator and apparel designer. She has 3 small boys, including 5 year old identical twins, and thus spends most of her days hiding in the office hoping for quiet, and stepping on Lego.