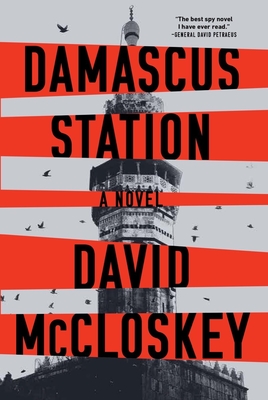 Finalist for the 2022 ITW Thriller Award for Best First Novel

A CIA officer and his recruit arrive in war-ravaged Damascus to hunt for a killer in this page-turner that offers the "most authentic depiction of modern-day tradecraft in print." (Navy SEAL sniper and New York Times bestselling author Jack Carr).

CIA case officer Sam Joseph is dispatched to Paris to recruit Syrian Palace official Mariam Haddad. The two fall into a forbidden relationship, which supercharges Haddad’s recruitment and creates unspeakable danger when they enter Damascus to find the man responsible for the disappearance of an American spy.

But the cat and mouse chase for the killer soon leads to a trail of high-profile assassinations and the discovery of a dark secret at the heart of the Syrian regime, bringing the pair under the all-seeing eyes of Assad’s spy catcher, Ali Hassan, and his brother Rustum, the head of the feared Republican Guard. Set against the backdrop of a Syria pulsing with fear and rebellion, Damascus Station is a gripping thriller that offers a textured portrayal of espionage, love, loyalty, and betrayal in one of the most difficult CIA assignments on the planet.

David McCloskey is a former CIA analyst and former consultant at McKinsey & Company. While at the CIA, he worked in field stations across the Middle East and briefed senior White House officials and Arab royalty. He lives in Texas.
A truly sensational read! In fact, Damascus Station is the best spy novel I have ever read. David McCloskey experienced Syria firsthand as a CIA analyst, and he delivers a thrilling, graphic, gripping, and realistic—albeit fictional—portrayal of the CIA and the bloody, tragic Syrian uprising. I lived this extraordinarily frustrating episode in Agency history, and I could not put this book down.

— General David Petraeus, US Army (Ret.), former director of the CIA, and former commander of the Surge in Iraq, US Central Command, and International and US Forces in Afghanistan

The nightmare of the Syrian civil war is vividly portrayed by David McCloskey in Damascus Station. He captures the places and people—and most of all, the sickening feeling in the gut—of this war that shattered poor Syria while America mostly watched. As a former CIA officer, McCloskey gets the details right—not just the little ones about mistimed clocks on the wall at Headquarters but the big ones about trying to keep faith with people in a faithless business. This isn’t just a realistic spy novel, it’s real life.

— David Ignatius, columnist for the Washington Post and author of The Paladin

Damascus Station is simply marvellous storytelling...a stand-out thriller and essential reading for fans of the genre.

[A] gripping, well-written page turner that is part-thriller, part-love story, part-spy tale, and part-historical fiction concerning Syria and the Arab Spring. Any one of those elements on their own makes it well worth reading; the combination makes it compelling.
— Foreign Policy

[T]his propulsive thriller is at once a master class in spy craft and a poignant story of forbidden love set during the brutal Syrian civil war.
— People

I'm a fan of spy thrillers, and I just read the best one I've consumed in decades …. I’ve never known a writer as good at the spy novel as John LeCarre, but McCloskey approaches. We're watching the emergence of a remarkable talent.
— Nick Kristof - On the Trail with Nick Kristof

I could not put down McCloskey’s gripping spy novel Damascus Station.…A must-read for anyone interested in Syria or espionage.

[T]ruly one of the finest entries into the modern spy thriller genre. In a field groaning with ludicrous plots, absurd characters, and laughable “espionage,” McCloskey—a former CIA analyst—has crafted a book that goes back to the roots of what makes a spy thriller great, the spying.
— Diplomatic Courier

[A] swift dive into the lethal, nebulous world of CIA operations in the Middle East…Damascus Station is a breathless ride.

An extremely effective modern espionage novel, filled with action and incident but also a profound knowledge of the people and factions of Syria, the complex maneuvers of spycraft, the gray areas, competing egos and overlapping priorities that make every day a journey through the minefield….[A] dazzling debut.
— Neil Nyren - Booktrib

A volatile mix of traditional espionage plotlines intertwined with a modern level of violence that had me flipping pages until the early morning hours.
— Best Thriller Books

[A]n uncommonly gripping first novel....Damascus Station combines an insider’s account of tradecraft—detailed enough to satisfy the most demanding geeks—with compassion for the Syrian people, outrage at the Assad regime, and an up-to-the-minute old-fashioned love story.

The most realistic and authentic depiction of modern-day tradecraft in nonpermissive and hostile environments you will find in print. I am shocked the CIA’s Publication Review Board allowed David McCloskey’s Damascus Station to see the light of day. Read it now, before it is banned!

For an authentic representation of what it’s like to work in intelligence, look no further than Damascus Station. McCloskey has captured it all: the breathtaking close calls, the hand in glove of tech and ops, the heartbreaking disappointments, the thrill of a hard-won victory.

Damascus Station tells the tragic story of Syria's descent into chaos and the price paid by its people during the Assad regime's brutal crackdown. The power of this book is that it tells this devastating story through the eyes of those who suffered and survived because of love, the human relationship, and the power of what makes life worth living.

— Leon E. Panetta, former Director of the CIA and former secretary of defense

From an exfiltration gone awry to a stunning endgame, Damascus Station takes the reader on a breathtaking journey in war-torn Syria. McCloskey delivers a thrilling page-turner that is marked by his exceptional understanding of the country and matched by his sophistication in the ways of CIA tradecraft.

[An] exhilarating debut.…McCloskey portrays the brutal inner functioning of the Assad regime, as well as the CIA’s occasional ineptitude, while detailing such elements of spy craft as avoiding tails, maximizing dead drops, and operating safe houses. Refreshingly, as shown in the relationship between Sam and Mariam, he dares to be sentimental. Espionage fans will eagerly await his next.
— Publishers Weekly (starred review)