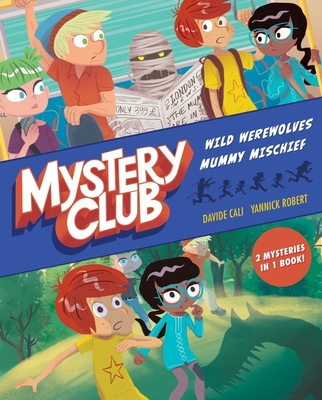 
Available in Warehouse. Wait for Email Confirmation for ETA
Two graphic novel mysteries in one book, each filled with fun humor and intrigue. Are there really werewolves in London? Mummies in the metro? Fear not—Mystery Club is on the case!

In Wild Werewolves, a stranger approaches Zoey and Kyle in the library as they ask the question: "Do you think monsters exist in London?" The stranger gives them information that sets them on a city-wide adventure with Ashley and Tyler. The Mystery Club pieces together the werewolf mystery and the identity of the stranger and a zany series of events ensues.

In Mummy Mischief, train passengers spot a mummy in the subway. Then it happens again! The occurrences are uncanny and strange enough to lure the Mystery Club to action. As they unwrap the mysteries of the mummy appearances, they unearth even more hijinks than they bargained for.
Davide Cali is a Swiss-born Italian author, working primarily in children's literature and graphic novels. His work has been published in twenty-five countries including Germany, France, Portgual, and been translated into over thirty languages. He also writes under the pseudonyms Taro Miyazawa and Daikon. He lives in Italy.

Yannick Robert is a French illustrator and author working in both France and the United Kingdom. Along with working in children's and editorial publishing, he also creates comics, animation, exhibition work, pop-up work, and more. He was also a lecturer for several years at the IUP Applied Arts of Montauban (University Toulouse II Le Mirail). He lives in Toulouse, France. Visit him online at yannickrobert.ultra-book.com.