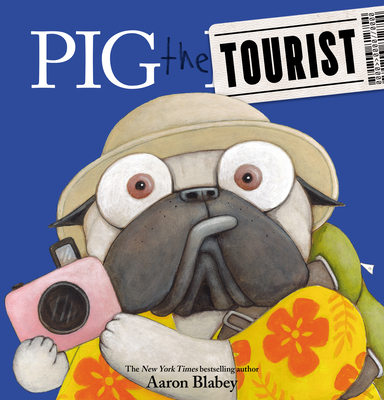 Pig the Pug is causing havoc and hilarity as he travels around the world.
Pig was a Pug
and I'm sorry to say,
when he went on vacation
he'd cause great dismay.

Everywhere he goes around the globe, Pig the Pug offends the locals and causes destruction and devastation. However, in the end, Pig's rudeness comes back to bite him...

Rich with author-illustrator Aaron Blabey's signature rhyming text and unforgettable illustrations, Pig the Tourist is a laugh-out-loud story that follows the six previous books in the series (Pig the Pug, Pig the Winner, Pig the Elf, Pig the Star, Pig the Fibber, and Pig the Stinker).

AARON BLABEY has written many well-loved, bestselling books for children. He is the creator of three hugely successful series for children -- the New York Times bestselling The Bad Guys, Pig the Pug, and Thelma the Unicorn. In 2018, it was announced that a movie adaptation of The Bad Guys is in development at DreamWorks Animation with Aaron serving as an executive producer on the project. Aaron's books have won many awards, including nine REAL Awards, an INDIE Book Award for Children's Book of the Year, a Children's Book Council of Australia -- Book of the Year Award, a NSW Premiers Literary Award for Children's Literature, two Australian Book Design Awards, and a Children's Peace Literature Award.

Praise for Pig the Winner:

"The goggle-eyed cartoon illustrations are fun, funny, and appealingly grotesque in their exaggerated goofiness, and they are a good match for the rhyming text." -- Kirkus Reviews


Praise for Pig the Pug: