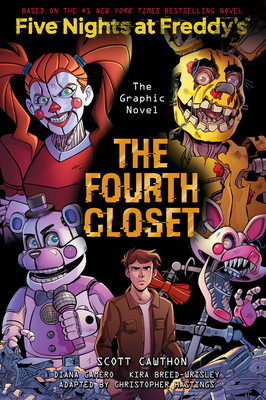 
Available in Warehouse. Wait for Email Confirmation for ETA
From the creator of the horror video game sensation Five Nights at Freddy's comes this pulse-pounding graphic novel adaptation of the bestselling trilogy's thrilling conclusion!

What really happened to Charlie? It's the question that John can't seem to shake, along with the nightmares of Charlie's seeming death and miraculous reappearance. John just wants to forget the whole terrifying saga of Freddy Fazbear's Pizza, but the past isn't so easily buried.Meanwhile, there's a new animatronic pizzeria opening in Hurricane, along with a new rash of kidnappings that feel all too familiar. Bound together by their childhood loss, John reluctantly teams up with Jessica, Marla, and Carlton to solve the case and find the missing children. Along the way, they'll unravel the twisted mystery of what really happened to Charlie, and the haunting legacy of her father's creations.

Told through delightfully scary artwork from artist Diana Camero, and with even more horror than ever before, fans won't want to miss this graphic novel adaptation straight from the mind of Five Nights at Freddy's creator Scott Cawthon

Diana Camero was born in Tamaulipas, Mexico. Although she graduated from college as a Graphic Designer, she is dedicating her life to videogames, comic books, and illustration.

Recently, she has worked for the videogames industry as a 2D concept designer but now she’s become an independent comic book artist. Her comic artwork includes Oneshi Press Anthology Mr. Guy Zombie Hunter and Guts comics. She is a huge fan of Five Nights at Freddy’s!

Kira Breed-Wrisley has been writing stories since she could first pick up a pen and has no intention of stopping. She is the author of seven plays for Central New York teen theater company The Media Unit, and has developed several books with Kevin Anderson & Associates. She is a graduate of Cornell University, and lives in Brooklyn, New York.
Christopher Hastings is a comics writer best known for creating the award-winning Adventures of Dr. McNinja and co-creating The Unbelievable Gwenpool. His other writing credits include Adventure Time, Deadpool, and Quantum & Woody. Christopher also voices Frederick de Bonesby for the narrative play podcast Rude Tales of Magic.
Scott Cawthon is the author of the bestselling video game series Five Nights at Freddy's, and while he is a game designer by trade, he is first and foremost a storyteller at heart. He is a graduate of The Art Institute of Houston and lives in Texas with his family.