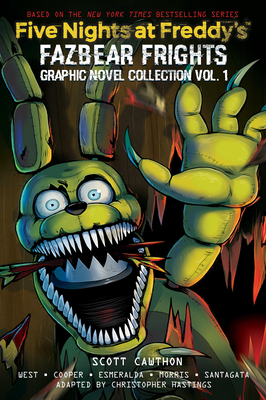 
Available in Warehouse. Wait for Email Confirmation for ETA
The New York Times bestselling series is now a graphic novel -- Five Nights at Freddy's fans won't want to miss this pulse-pounding collection of three novella-length comic stories that will keep even the bravest player up at night . . .

What do you wish for most? It's a question that Oswald, Sarah, and Oscar think they know the answer to. Oswald wishes his summer wasn't so boring, Sarah wishes to be beautiful, and Oscar wishes to get his hands on the mechanical toy that's out of stock all over town. But in the twisted world of Five Nights at Freddy's, their hearts' deepest desires have an unexpected cost.

Christopher Hastings is a comics writer best known for creating the award-winning Adventures of Dr. McNinja and co-creating The Unbelievable Gwenpool. His other writing credits include Adventure Time, Deadpool, and Quantum & Woody. Christopher also voices Frederick de Bonesby for the narrative play podcast Rude Tales of Magic.
Carly Anne West is the author of the YA novels The Murmurings and The Bargaining. She holds an MFA in English and Writing from Mills College and lives with her husband and two kids in Seoul, South Korea. Visit her at carlyannewest.com.
Elley Cooper writes fiction for young adults and adults. She has always loved horror and is grateful whenever she can spend time in a dark and twisted universe. Elley lives in Tennessee with her family and many spoiled pets and can often be found writing books with Kevin Anderson & Associates.
Scott Cawthon is the author of the bestselling video game series Five Nights at Freddy's, and while he is a game designer by trade, he is first and foremost a storyteller at heart. He is a graduate of The Art Institute of Houston and lives in Texas with his family.