Frankenstein and Its Classics: The Modern Prometheus from Antiquity to Science Fiction (Bloomsbury Studies in Classical Reception) (Hardcover) 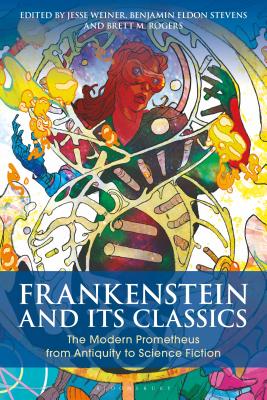 Frankenstein and Its Classics: The Modern Prometheus from Antiquity to Science Fiction (Bloomsbury Studies in Classical Reception) (Hardcover)

Frankenstein and Its Classics is the first collection of scholarship dedicated to how Frankenstein and works inspired by it draw on ancient Greek and Roman literature, history, philosophy, and myth. Presenting twelve new essays intended for students, scholars, and other readers of Mary Shelley's novel, the volume explores classical receptions in some of Frankenstein's most important scenes, sources, and adaptations. Not limited to literature, the chapters discuss a wide range of modern materials-including recent films like Alex Garland's Ex Machina and comics like Matt Fraction's and Christian Ward's Ody-C-in relation to ancient works including Hesiod's Theogony, Aeschylus's Prometheus Bound, Ovid's Metamorphoses, and Apuleius's The Golden Ass.

All together, these studies show how Frankenstein, a foundational work of science fiction, brings ancient thought to bear on some of today's most pressing issues, from bioengineering and the creation of artificial intelligence to the struggles of marginalized communities and political revolution. This addition to the comparative study of classics and science fiction reveals deep similarities between ancient and modern ways of imagining the world-and emphasizes the prescience and ongoing importance of Mary Shelley's immortal novel. As Frankenstein turns 200, its complex engagement with classical traditions is more significant than ever.
Jesse Weiner is Visiting Assistant Professor of Classics at Hamilton College, USA. Benjamin Eldon Stevens is Visiting Assistant Professor of Classics at Trinity University, USA. Brett M. Rogers is Associate Professor of Classics at the University of Puget Sound, USA.