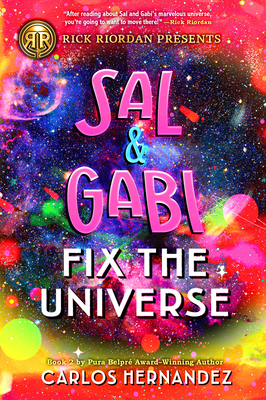 *"This excellent sequel features nonstop multiverse hijinks, great comedy, and heartening moments that are skillfully interwoven with a subplot that features a delightfully surreal student production of Alice in Wonderland."--Booklist (starred review)

Among many other challenges, Sal and Gabi have to try to make everything right with our world when there is a rogue Gabi from another universe running loose.

Sal Vidon doesn't want to live a Mami-free life. Pulling different versions of his mother from other universes is how he copes with missing his own, who died years ago. But Sal's father, a calamity physicist, is trying to shut down all the wormholes Sal creates, because Papi thinks they are eroding the very fabric of our world. All of Papi's efforts are in vain, however, because a Gabi from another universe has gone rogue and is popping up all over the place, seeking revenge for the fact that her world has been destroyed.

While Sal and Gabi work together to keep both Papi and Rogue Gabi under control, they also have to solve the mystery of Yasmany, who has gone missing from school. Could it have something to do with the wormhole in the back of his locker?

With multiple Sals and Gabis in charge, it's no wonder this sequel offers even more hilarious weirdness and love than the first book.

Endorsed by Rick Riordan, author of Percy Jackson and the Olympians, soon to be a series on Disney+.

Carlos Hernandez has published more than thirty works for fiction, poetry, and drama, including Sal and Gabi Break the Universe, for which he won a Pura Belpré Author Award from the American Library Association, and its sequel, Sal and Gabi Fix the Universe. He is an English professor at City University of New York, and he loves to both play games and design them. He lives with his wife, Claire, in Queens, New York. Follow him on Twitter: @WriteTeachPlay.
*"In the construction of Sal and Gabi's world, Hernandez has fixed our own universe--not by removing its flaws, but by populating it with people who care for one another. It's a place for readers to live in, a haven they can always escape to for comfort and hope. And also, fart jokes. But mostly hope . . ."—Booklist, starred review