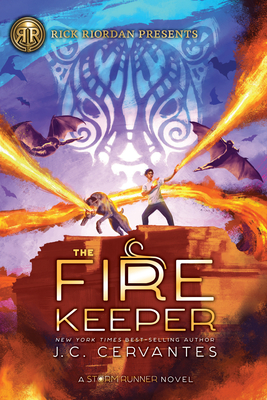 "An excellent sequel that doesn't fall short, gearing readers up for big battles in the future.The story's cast has grown considerably, but the characters are all distinct and relatable in their own ways."--Booklist

Zane Obispo has an impossible choice to make: save other godborns like him from the angry gods, or rescue his father Hurakan from his eternal prison.

Zane Obispo's new life on a beautiful secluded tropical island, complete with his family and closest friends, should be perfect. But he can't control his newfound fire skills yet (inherited from his father, the Maya god Hurakan); there's a painful rift between him and his dog ever since she became a hell hound; and he doesn't know what to do with his feelings for Brooks.

One day he discovers that by writing the book about his misadventures with the Maya gods, he unintentionally put other godborn children at risk. Unless Zane can find the godborns before the gods do, they will be killed.
To make matters worse, Zane learns that Hurakan is scheduled to be executed. Zane knows he must rescue him, no matter the cost. Can he accomplish both tasks without the gods detecting him, or will he end up a permanent resident of the underworld?

In this cleverly plotted sequel to The Storm Runner, the gang is back together again with spirited new characters, sneaky gods, Aztec royalty, unlikely alliances, and secrets darker than Zane could ever have imagined. Secrets that will change him forever.

Endorsed by Rick Riordan, author of Percy Jackson and the Olympians, soon to be a series on Disney+.
J. C. Cervantes (www.jennifercervantes.com) is the New York Times best-selling author of The Storm Runner, which Booklist called "a rip-roaring adventure" in a starred review. Her first novel, Tortilla Sun, was a 2010 New Voices pick by the American Booksellers Association and was named to Bank Street's 2011 Best Book List. Jen grew up in San Diego and was fascinated by stories about Maya gods and magic. Follow her on Facebook, Twitter: @jencerv, and Instagram: #authorjcervantes.