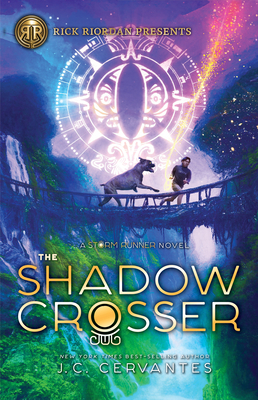 This is book number 3 in the Storm Runner series.

"J. C. Cervantes is about to take you on a trip you will never forget, through the darkest, strangest, and funniest twists and turns of Maya myth. You will meet the scariest gods you can imagine, the creepiest denizens of the Underworld, and the most amazing and unlikely heroes who have to save our world from being ripped apart."--Rick Riordan

Zane Obispo has been looking forward to his training at the Shaman Institute for Higher Order Magic, and not only because it means he'll be reunited with his best friend, Brooks. Anything would be better than how he has spent the last three months: searching for the remaining godborns with a nasty demon who can sniff them out (literally). But when Zane tracks down the last kid on his list, he's in for a surprise: the "one" is actually a pair of twins, and they're trying to prevent a mysterious object from falling into the wrong hands.

After a shocking betrayal, Zane finds himself at SHIHOM sooner than expected. Even more shocking is the news that the Maya gods have gone missing. The bat god, Camazotz, and Ixkik' (aka Blood Moon) have taken them out of commission . . . and the godborns are their next target. The only thing the villains need now? The object that the twins possess.

Zane knows the godborns aren't strong enough yet to stand up to Zotz, Ixkik', and their army. There might be a way to save the gods, but it involves locating a magical calendar that can see across time and space . . . not to mention traveling more than thirty years into the past.

In The Shadow Crosser, Zane and his friends embark on their most treacherous mission yet--a mission that, with one blunder, could change history as we know it, and worse, destroy the universe.


Endorsed by Rick Riordan, author of Percy Jackson and the Olympians, soon to be a series on Disney+.

J. C. Cervantes (www.jennifercervantes.com) is the New York Times best-selling author of The Storm Runner, which Booklist called "a rip-roaring adventure" in a starred review, and its sequels, The Fire Keeper and The Shadow Crosser. Her first novel, Tortilla Sun, was a 2010 New Voices pick by the American Booksellers Association and was named to Bank Street's 2011 Best Book List. Jen grew up in San Diego and was fascinated by stories about Maya gods and magic. Follow her on Twitter: @jencerv, and Instagram: #authorjcervantes.