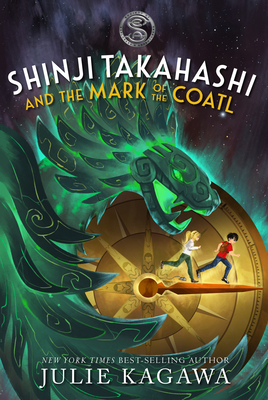 
On Our Shelves as of 9am Today
One of the most beloved stories from The Walt Disney Parks is now a romping middle grade adventure series! High-tech wizardry, old world legends and a little bit of Disney magic all shine through in Shinji Takahashi and the Mark of the Coatl, the first book in the Society of Explorers and Adventurers series from renowned best-selling author, Julie Kagawa.


"One cannot fight destiny, boy. Even if one did not ask for it. The idol calls for you, and you must answer its call..."

Shinji Takahashi is just an ordinary kid. An ordinary homeschooled smart-alecky kid being raised by his globe-trotting aunt Yui. But when a magical guardian decides to use him as a conduit to awaken its power, Shinji’s life takes a turn for the anything-but-ordinary. Captured by the menacing Hightower Corporation, which is bent on using the guardian’s magic for its own nefarious purposes, Shinji must team up with a brilliant young tech whiz named Lucy and her robot mouse, Tinker, in order to escape.

Together the two turn to the venerable Society of Explorers and Adventurers and its ragtag cast of spelunkers, hackers, mapmakers, pilots, and mythology experts (among other things) to return the guardian to its rightful home and release Shinji from its magic—which seems to be draining his life force. Time is ticking, the Hightower Corporation is in hot pursuit, and success or failure might depend on one small thing—Shinji finally coming around to the belief that he is anything but ordinary.

Based on the Society of Explorers and Adventurers lore that exist across the Walt Disney Parks, Shinji Takahashi and the Mark of the Coatl is the first book in an all-new action-adventure series that brings S.E.A. into the twenty-first century through a blend of science and magic.
Julie Kagawa is the New York Times bestselling author of the Iron Fey, Blood of Eden, Talon, and Shadow of the Fox series. She was born in Sacramento, California. But nothing exciting really happened to her there. So, at the age of nine she and her family moved to Hawaii, which she soon discovered was inhabited by large carnivorous insects, colonies of house geckos, and frequent hurricanes. She spent much of her time in the ocean, when she wasn’t getting chased out of it by reef sharks, jellyfish, and the odd eel. She worked as a professional dogtrainer for several years, dodging Chihuahua bites and overly enthusiastic Labradors, until her first book sold and she stopped training to write full time. Julie now lives in North Carolina with her husband, two obnoxious cats, and a pair of Australian Shepherds that have more Instagram followers than she does. You can follow her on Instagram or Twitter @JKagawa or check out her website at juliekagawa.com.

"As thrilling and fast-moving as a rollercoaster ride! Shinji’s story will captivate even the most reluctant reader. I loved every second of this book!"—Jen Calonita, New York Times best-selling author of the A Twisted Tale series

"Don’t miss out as Shinji Takahashi goes on the adventure of a lifetime as he tries to solve the riddle of an ancient curse! It’s a non-stop thrill ride that will leave you breathless and wanting to join the Society of Explorers and Adventurers!"—James Ponti, New York Times best-selling author of the City Spies series