Letters to a Young Artist: Straight-up Advice on Making a Life in the Arts-For Actors, Performers, Writers, and Artists of Every Kind (Paperback) 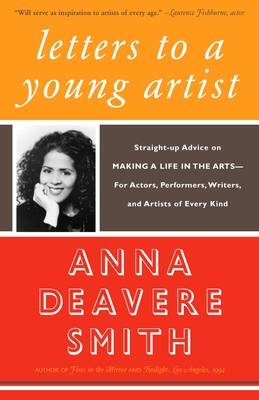 Letters to a Young Artist: Straight-up Advice on Making a Life in the Arts-For Actors, Performers, Writers, and Artists of Every Kind (Paperback)

An inspiring and no-nonsense guide for aspiring artists of all stripes—from “the most exciting individual in American theater” (Newsweek).

In vividly anecdotal letters to the young BZ, Anna Deavere Smith addresses the full spectrum of issues that all artists starting out will face: from questions of confidence, discipline, and self-esteem, to fame, failure, and fear, to staying healthy, presenting yourself effectively, building a diverse social and professional network, and using your art to promote social change. At once inspiring and no-nonsense, Letters to a Young Artist will challenge you, motivate you, and set you on a course to pursue your art without compromise.

ANNA DEAVERE SMITH is an actor, a teacher, a playwright, and the creator of an acclaimed series of one-woman plays based on her interviews with diverse voices from communities in crisis. She has won two Obie Awards, two Tony nominations for her play Twilight: Los Angeles, 1992, and a MacArthur Fellowship. She was a Pulitzer Prize finalist for her play Fires in the Mirror. She has had roles in the films Philadelphia, An American President, The Human Stain, and Rent, and she has worked in television on The Practice, Presidio Med, and The West Wing. The founder and director of the Institute on the Arts and Civic Dialogue, she teaches at New York University and lives in New York City.

“Will serve as inspiration to artists of every age.” —Laurence Fishburne

“A practical manual for any artist as well as a powerful reminder of how we can and should live through our art.” —Martin Sheen

“Imagine being pen pals with one of the world’s greatest artistic geniuses. That is the miracle of this book.” —Kerry Washington

“Brilliant.... A treasure for anyone contemplating a career in the arts–and, frankly, for anyone already in the midst of one.” —Dawn Raffel

“A motivating example for all of us.” —Mary Ellen Mark

“Her advice is as relevant to a youngster just beginning to explore artistic options as it is to adults already accomplished in their art.” —Esmeralda Santiago