The Careful Use of Compliments (Isabel Dalhousie Series #4) (Paperback) 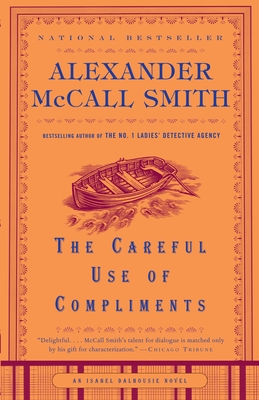 The Careful Use of Compliments (Isabel Dalhousie Series #4) (Paperback)

This is book number 4 in the Isabel Dalhousie Series series.

In the fourth installment of this enchanting, beloved series, Isabel Dalhousie, who is now a mother, returns to investigate an irresistible puzzle in the art world.

Isabel Dalhousie—the nosiest and most sympathetic philosopher you are likely to meet—now has a son, Charlie, whose doting father Jamie has an intriguing idea to pose to Isabel: marriage. But Isabel wonders if Jamie is too young to be serious? And how would Cat respond? On top of these matters, the ambitious Professor Dove has seized Isabel's position as editor of the Review of Applied Ethics. However, nothing it seems can diminish Isabel's innate curiosity. And when she recognizes that two paintings attributed to a deceased artist have simultaneously appeared on the market, she can't help but think that they're forgeries. So Isabel begins an investigation and soon finds herself diverted from her musings about parenthood and onto a path of inquiry into the soul of an artist.

Alexander McCall Smith is the author of the international phenomenon The No. 1 Ladies' Detective Agency series, the Isabel Dalhousie series, the Portuguese Irregular Verbs series, and the 44 Scotland Street series. He is professor emeritus of medical law at the University of Edinburgh in Scotland and has served on many national and international bodies concerned with bioethics.www.AlexanderMcCallSmith.com
“Delightful…. McCall Smith's talent for dialog is matched only by his gift for characterization.”—Chicago Tribune “Just the right sort of thing to slip into a suitcase for an end-of-summer vacation.”—Dallas-Ft. Worth Star Telegram“Isabel Dalhousie is one of the most irresistible sleuths in modern fiction.”—Tucson Citizen