Thermopylae: The Battle That Changed the World (Paperback) 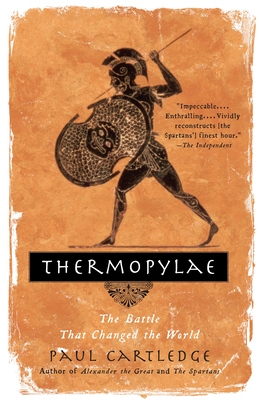 Thermopylae: The Battle That Changed the World (Paperback)


This title is likely unavailable. Email or call for price and availability.
In 480 B.C., the mighty Persian king Xerxes led a massive force to the narrow mountain pass called Thermopylae, anticipating no significant resistance in his bid to conquer Greece. But the Greeks, led by Leonidas and a small army of Spartan warriors, took the battle to the Persians and nearly halted their advance.

Paul Cartledge's riveting, authoritative account of King Leonidas and the legendary 300 illuminates this valiant endeavor that changed the way future generations would think about combat, courage, and death.
Paul Cartledge, professor of Greek history at the University of Cambridge, is the author of Alexander the Great, The Spartans, and The Greeks: Crucible of Civilization.
“Impeccable...Enthralling...Vividly reconstructs [the Spartans’] finest hour.”
–The Independent

“Briskly written...Offers a fresh look at the battle and the complex events leading up to it.”
–Forbes

“In the annals of heroism, the Battle of Thermopylae is an archetype, a classic.”
–Noel Malcolm, The Telegraph (UK)

“The real passion of Thermopylae lies in the author’s sudden discovery that his subject is exciting to other people again.”
–The Wall Street Journal