The Nine: Inside the Secret World of the Supreme Court (Paperback) 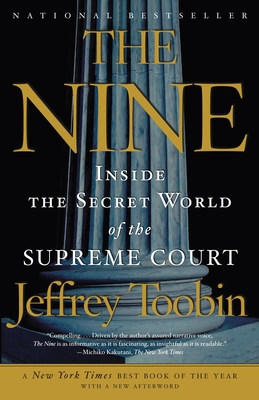 Acclaimed journalist Jeffrey Toobin takes us into the chambers of the most important—and secret—legal body in our country, the Supreme Court, revealing the complex dynamic among the nine people who decide the law of the land. An institution at a moment of transition, the Court now stands at a crucial point, with major changes in store on such issues as abortion, civil rights, and church-state relations. Based on exclusive interviews with the justices and with a keen sense of the Court’s history and the trajectory of its future, Jeffrey Toobin creates in The Nine a riveting story of one of the most important forces in American life today.

Jeffrey Toobin is a staff writer at The New Yorker, senior legal analyst at CNN, and the authors of such best-sellers as Too Close to Call: The Thirty-Six Day Battle to Decide the 2000 Election, A Vast Conspiracy: The Real Story of the Sex Scandal that Nearly Brought Down a President, and The Run of His Life: The People v. O.J. Simpson.