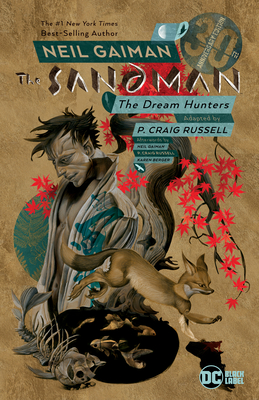 
Available in Warehouse. Wait for Email Confirmation for ETA
A humble young monk and a magical, shape-changing fox find themselves romantically drawn together. As their love blooms, the fox learns of a devilish plot by a group of demons and a Japanese emperor to steal the monk's life.

One of the most popular and critically acclaimed graphic novels of all time, Neil Gaiman's award-winning masterpiece The Sandman set the standard for mature, lyrical fantasy in the modern comics era. Illustrated by an exemplary selection of the medium's most gifted artists, the series is a rich blend of modern and ancient mythology in which contemporary fiction, historical drama, and legend are seamlessly interwoven.

In The Dream Hunters, legendary artist P. Craig Russell returns to the world of the Dreaming to adapt Neil Gaiman and artist Yoshitaka Amano's original illustrated novella into a mesmerizing new comics interpretation. Retelling Gaiman's celebrated story of a humble young monk and the magical fox who falls in love with him. Russell beautifully brings to life every aspect of the richly evocative world set down in this timeless fable of desire, sacrifice, and love that was never meant to be.

OVERTURE
PRELUDES & NOCTURNES
THE DOLL'S HOUSE
DREAM COUNTRY
SEASON OF MISTS
A GAME OF YOU
FABLES & REFLECTIONS
BRIEF LIVES
WORLDS' END
THE KINDLY ONES
THE WAKE
ENDLESS NIGHTS
THE DREAM HUNTERS
Creator of The Sandman and one of comics' most accomplished writers, Neil Gaiman is also the New York Times best-selling author of the novels Anansi Boys, American Gods, Stardust and Coraline, as well as the short story collections M Is for Magic and Smoke and Mirrors and the multimedia creation Neverwhere. He also co-wrote the Jim Henson Productions film MirrorMask with longtime collaborator Dave McKean, illustrator of the Gaiman-written graphic novels MR. PUNCH, Violent Cases and Black Orchid. Among his many awards are the Hugo, the Nebula, the Eisner, the Harvey, the Bram Stoker and the World Fantasy Award. Originally from England, Gaiman now lives in the United States.