Zatanna: The Jewel of Gravesend (Paperback) 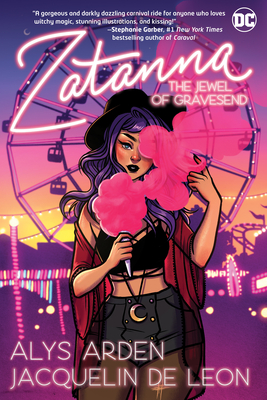 Zatanna: The Jewel of Gravesend (Paperback)


Available in Warehouse. Wait for Email Confirmation for ETA
From the bewitching mind behind The Casquette Girls, Alys Arden and with enchanting artwork by Jacquelin de Leon comes the story of a girl stuck in the middle of a magical rivalry and forced to choose between love, family, and magic without hurting anyone...or worse.

There's more to the mobsters, mystics, and mermaids at the last stop on the D/F/Q trains: Coney Island-Stillwell Avenue.

Zatanna's not your typical New Yorker. She walks her giant rabbit on a leather leash down the boardwalk, lives in a colossal architectural wonder known as the Golden Elephant, had her first kiss in the Haunted HellGate ride--and wouldn't have it any other way.

But the time for having fun in Luna Park comes to an end when a mystic's quest for a powerful jewel unravels everything Zatanna thought she knew about herself and her beloved neighborhood. Mysteries and magic surround her as she reveals the truth about her family's legacy, and confronts the illusion that has been cast over her entire life.
Alys Arden was raised by the street performers, tea-leaf readers, and glittering drag queens of the New Orleans French Quarter. She cut her teeth on the streets of New York and has worked all around the world since. The Casquette Girls, her debut novel, garnered over one million reads online before it was acquired by Skyscape. The fourth book in the series, The Gates to Guinée, is due out in 2020. Zatanna: The Jewel of Gravesend is her first graphic novel.

Jacquelin de Leon is an illustrator and comics artist currently located in San Jose, California. She graduated with a BFA in illustration and entertainment design from Laguna College of Art and Design. Since graduating in 2015 she has become an illustration brand, self-publishing multiple books and working full-time to produce for her online shop and her YouTube channel. When not working on major projects, her favorite subjects are vivid and magical mermaids, sultry witches, and tattooed punk girls with colored hair.