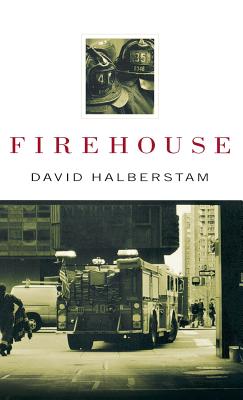 
Available in Warehouse. Wait for Email Confirmation for ETA
One of America's most distinguished reporters and historians offers the deeply moving personal story of Engine 40, Ladder 35 -- located on the West Side of Manhattan near Lincoln Center -- and the absolute sacrifice its firefighters made on September 11, 2001.

On the morning of September 11, 2001, two rigs carrying thirteen men set out from this firehouse: twelve of them would never return.

Firehouse takes us to the epicenter of the tragedy. Through the kind of intimate portraits that are Halberstam's trademark, we watch the day unfold--the men called to duty while their families wait anxiously for news of them. In addition, we come to understand the culture of the firehouse itself: why gifted men do this; why, in so many instances, they are eager to follow in their fathers' footsteps and serve in so dangerous a profession; and why, more than anything else, it is not just a job, but a calling.

This is journalism-as-history at its best, the story of what happens when one small institution gets caught in an apocalyptic day. Firehouse is a book that will move readers as few others have in our time.

More than 6 years after his death David Halberstam remains one of this country's most respected journalists and revered authorities on American life and history in the years since WWII. A Pulitzer Prize-winner for his groundbreaking reporting on the Vietnam War, Halberstam wrote more than 20 books, almost all of them bestsellers. His work has stood the test of time and has become the standard by which all journalists measure themselves.
David Halberstam (1934-2007) was the author of twenty-two books, including fifteen bestsellers. Born in New York City, Halberstam spent much of the 1960s as a reporter for the New York Times, covering the Vietnam War and the Civil Rights movement. His Vietnam reporting earned him both a George C. Polk Award and a 1964 Pulitzer Prize for International Reporting. Vanity Fair dubbed Halberstam "the Moses of American journalism," and the subjects of his books reflect his passion and range: war, foreign policy, history, and sports.

The Best and the Brightest (1962), his sixth book, a critique of the Kennedy administration's Vietnam policy, became a #1 bestseller. His next book, The Powers that Be, a study of four American media companies, was hailed by the New York Times as a "prodigy of research." Many of Halberstam's books explored themes in professional sports, including bestsellers The Teammates, a portrait of the friendship between baseball players Ted Williams, Dominic DiMaggio, Johnny Pesky, and Bobby Doerr, and The Education of a Coach, a profile of New England Patriots' Coach Bill Belichick.
"Graceful and moving."—James Traub, The New York Times Book Review

"Poignant and immediate portrait of a New York firehouse. Halberstam delivers a jolting study in the impermanence of things, the swiftness with which the world can be transformed."—San Francisco Chronicle

"A very human face on the tragedy."—Minneapolis Star Tribune

"An understated little gem of a book."—St. Louis Post-Dispatch

"A remarkable study of a tightly knit workplace world and the impact of September 11 upon it."—Washington Times

"His special contribution is to anatomize the culture that incubated and nourished these remarkable public servants."—BookPage