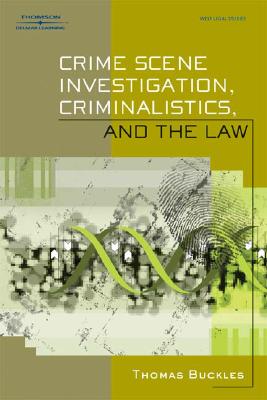 
This title is likely unavailable. Email or call for price and availability.
Crime Scene Investigation: Criminalistics, and the Law is a new title that is the first to include not only crime scene investigation and criminalistics, but also the laws that govern them. It focuses on how the crime scene should be investigated, searched, and processed for evidence, but also includes an emphasis on the legal admissibility of these procedures. This book discusses the forensic value of physical evidence and the role of forensic science and criminalistics in evaluating this evidence and presenting it in court. It's heavy on informative content that is reinforced by the many valuable and illustrative photographs, exhibits, and actual cases. Timely and familiar cases are used to help students better understand the importance of proper crime scene investigation. Included are the United States Supreme Court cases that deal with fire scene and death scene investigations, and a wealth of other recent state and federal cases that deal with crime scene search and seizure, forensic experts and testing, whether there is "implied" consent to search a crime scene, what constitutes an "exigency" at a crime scene, chain of custody, scientific testing, admissibility of crime scene evidence, the admissibility of blood splatter analysis, fingerprints, and DNAWith learning tools such as key terms, definitions, relevant Internet references, and end of chapter summaries, this book will leave the reader with a complete education regarding crime scene investigation.