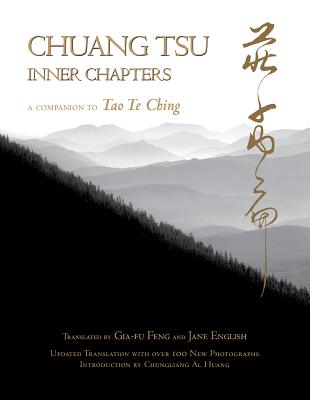 
Backordered - ETA Unknown
Chuang Tsu: Inner Chapters is a companion volume to Gia-fu Feng and Jane English’s translation of Tao Te Ching, which has enjoyed great success since its publication in 1972. Very little is known about Chuang Tsu, and that little is inextricably woven into legend. It is said that he was a contemporary of Mencius, an official in the Lacquer Garden of Meng in Honan Province around the 4th century b.c. Chuang Tsu was to Lao Tsu as Saint Paul was to Jesus and Plato to Socrates.While the other philosophers were busying themselves with the practical matters of government and rules of conduct, Chuang Tsu transcended the whang cheng, the illusory dust of the world—thus anticipating Zen Buddhism’s emphasis on a state of emptiness or ego transcendence. With humor, imagery, and fantasy, he captures the depth of Chinese thinking. The seven "Inner Chapters" presented in this translation are accepted by scholars as being definitely the work of Chuang Tsu. Another twenty-six chapters are of questionable origin; they are interpretations of his teaching and may have been added by later commentators. This is an updated version of the translation of Chuang Tsu: Inner Chapters that was originally published in 1974. Like the original Chinese, this version uses gender-neutral language wherever possible. This edition includes many new photographs by Jane English and an introduction by Tai Ji master Chungliang Al Huang, who has been highly successful in bringing to the West the wisdom of the East.
Jane English, whose photographs form an integral part of this book, was born in Boston in 1942. She holds a bachelor’s degree from Mount Holyoke College and received her doctorate from the University of Wisconsin in experimental high-energy particle physics in 1970. Her other works include Different Doorway: Adventures of a Caesarean Born, Fingers Pointing to the Moon, and The Ceremony Cards. Her current work may be seen at www.eheart.com. Gia-fu Feng was born in 1919 in the ancient city of Suzhou. He grew up in Shanghai, where his father was one of the founders of the Bank of China. During World War II, he graduated from Peking University, part of Southwestern Associated University, a university in exile in Kunming, Free China. He came to the United States in 1947 and earned a master’s degree in international banking at the Wharton School. In meeting Alan Watts in San Francisco and studying at the American Academy of Asian Studies, he found the path he had been seeking. He taught at Esalen Institute in Big Sur, California, and founded Stillpoint Foundation, a Taoist community in California and then Colorado, where he lived until his death in 1985.
I love and cherish Chuang Tsu. I admire his penetrating insight, acerbic wit, no-nonsense clarity, and his “flesh and blood” humanity. And I treasure his wealth of delightful, thought-provoking anecdotes and parables, his original mind, and his “windflow” personality. And most of all, I adore his humor and laughter. He is my hero and my kindred soul. Chuang Tsu helps us to take all serious matters lightly, and encourages us to be the “Laughing Philosopher.”
— Chungliang Al Huang