I Can Make You Happy (Paperback) 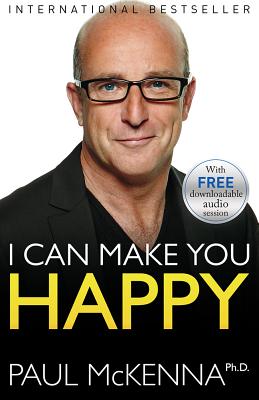 I Can Make You Happy (Paperback)


This title is likely unavailable. Email or call for price and availability.
Do you want to be happier?
Do you want to stop feeling bad right now?
Do you want to experience greater joy than ever before?
What if it was possible to feel happier than you had ever imagined before?

It doesn’t matter whether you’re sad, bored, or depressed—or even if you’re already quite content—Paul McKenna can help you become a whole lot happier! Scientific research reveals that our levels of happiness aren’t fixed; we can change them through our thoughts and actions. Dr. McKenna has spent the past 25 years developing a system that can have an immediate, measurable impact on people’s emotional well-being.

This book uses the latest, most powerful psychological techniques and a downloadable guided hypnosis session to help readers feel really good right now. The human mind is like a computer, with its own software that governs how we think and act. Most human problems are caused by negative programs running in the unconscious mind. This book and audio session help you install positive programs that seek out and magnify the factors that create happiness. Use it to take control of your life and start feeling happier today!
Paul McKenna, Ph.D., is described by Ryan Seacrest as "a cross between the Dr. Phil and Tony Robbins of Britain." Recently named by The Times of London as one of the world’s leading and most important modern gurus, alongside Nelson Mandela and the Dalai Lama, he is Britain’s best-selling nonfiction author, selling 8,000 books a week in 35 countries—a total of 10 million books in the past decade. He has worked his unique brand of personal transformation with Hollywood movie stars, Olympic gold medalists, rock stars, leading business achievers, and royalty. Over the past 20 years, Paul McKenna has helped millions of people successfully quit smoking, lose weight, overcome insomnia, eliminate stress, and increase self-confidence. Dr. McKenna has appeared on The Dr. Oz Show, Good Morning America, The Ellen DeGeneres Show, Rachael Ray, Anderson Live, and The Early Show. He is regularly watched on TV by hundreds of millions of people in 42 countries around the globe. He currently hosts his own TV show on Hulu, where he interviews the most interesting people in the world. His guests include Simon Cowell, Harvey Weinstein, Rachael Ray, Sir Roger Moore, Roger Daltrey, Tony Robbins, Paul Oakenfold, and Sir Ken Robinson. Website: www.mckenna.com