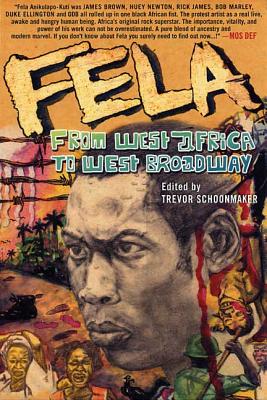 Combine elements of Bob Marley, Malcolm X and Patrice Lumumba you get a sense of the power of the world's wildest rockstar. Fela created Afrobeat, an infectious mix of American funk and jazz with traditional Yoruba and highlife music, and used it to rail against the corrupt, hypocritical Nigerian government. Repeatedly targeted by police and military for his rebellious, counter-culture lifestyle, he created a political party and seceded from the Nigerian state, renaming his commune the independent "Kalakuta Republic." Cultural icon and beloved hero of the pan-African world, Fela loomed large: captivating enormous crowds with electric performances (in Speedos or superfly suits), cherished by musicians from Paul McCartney to Mos Def, mourned by millions after his death from AIDS in 1997. These essays explore his fiery life and ever-growing legacy.

Trevor Schoonmaker is an independent curator living in New York. He is director of the Fela Project, a multimedia project on the influence of Fela Kuti.

Trevor Schoonmaker is an independent curator living in New York. He is director of the Fela Project, a multimedia project on the influence of Fela Kuti.

“...the book's diversity of perspectives is part of what makes it click.” —Malcolm Venable, Black Issues Book Review

“...a fascinating window onto the cultural politics of the developing world.” —Publishers Weekly Annex, 7/21/03

“Fela Anikulapo Kuti was James Brown, Huey Newton, Rick James, Bob Marley Duke Ellington and ODB all rolled up in one black African fist. The protest artist as a real live, awake and hungry human being. Africa's original rock superstar. The importance vitality and power of his work can not be overestimated. A pure blend of ancestry and modern marvel . If you don't know about Fela you surely need to find out now...!” —Mos Def

“An amazing compendium of work about the seminal 20th century African musical icon and activist.” —Meri Nana-Ama Danquah, author of Willow Weep for Me

“This is an excellent collection of articles on FELA, it gives so many angles for us to understand one of the most crucial African figures of this age.” —Angelique Kidjo

“This book is a trippy excursion into the world of conscious hero and musical icon Fela Kuti -- a must-read for all music lovers and people who care about the history and future of Africa and Africans around the world.” —Ahmir 'uestlove Thompson, The Roots