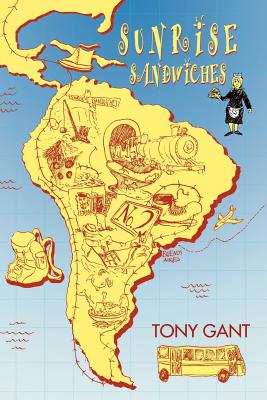 
Available in Warehouse. Wait for Email Confirmation for ETA
This book cannot be returned, cancelled, or exchanged. Please call for availability and pricing
Sunrise Sandwiches is the saga of a conservative Englishman and a socialist Fraulein backpacking throughout Latin America. Triumph and adversity alternate as improvised hotels and transport are confronted. Hugely enjoyable.
Tony was born in Balham, London, in March 1941, and spent most of his early years in the capital, or with his grandparents in Dorset when the bombing became intensive. He attended Balham High school, Franciscan Road Junior Boys, and then Battersea Grammar School where he obtained O levels in English Language, (Genuine), Music, (Genuine) and French (Not so genuine as a friend obtained the exam paper from the printers a week before the exam, and he, and others paid 10 shillings each to copy it out) . He joined W.H. Smith as a trainee manager, but soon became weary of the set routine, and with his father, started up a wholesale greeting card company which they ran between them until his father died in the mid-sixties. The firm expanded until the early eighties, and then because of forces that were outside of his control, it went into liquidation. Tony then became a market trader in the same commodity, and his stall, which he ran with his then wife, was an immediate success. In the late eighties, he began to travel to distant countries such as Hong Kong, the USSR, and Thailand, making use of these country's rail systems, thoroughly enjoying the experience. In 1991, he flew to Australia, and meant to return to England when the six-month visitors visa expired, but he was so taken with the journey round this fascinating continent, that he continued on to New Zealand, and from there, after a stay of three months, boarded a flight to Bali, where he met his future travel partner, Marita. Arrival back in England was delayed for another year and a half, as he took a scenic route that involved travelling through another dozen or so countries. Naturally, his wife was none too pleased at this escapade, and promptly divorced him. Undeterred by this event, he started up a window cleaning round in the Midlands, to earn enough money to travel to South America, and the rest, as they say, is history. In all, Tony has been married and divorced three times, and is father to three children, grandfather to eight, and great-grandfather to four...at the last count. Aged 64, he is contemplating another world trip starting out with an Easy Jet flight to Poland, in order to travel over the last steam operated suburban line in Europe. His kids think that he is bloody eccentric, but can't wait for the next instalment of his life's journey.