Ratio: The Simple Codes Behind the Craft of Everyday Cooking (Paperback) 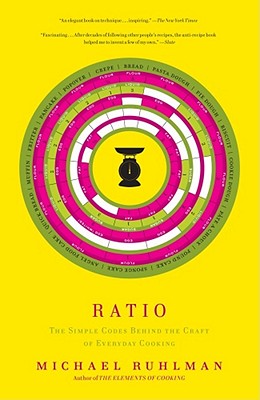 Ratio: The Simple Codes Behind the Craft of Everyday Cooking (Paperback)


Available in Warehouse. Wait for Email Confirmation for ETA
Michael Ruhlman’s groundbreaking New York Times bestseller takes us to the very “truth” of cooking: it is not about recipes but rather about basic ratios and fundamental techniques that makes all food come together, simply.

When you know a culinary ratio, it’s not like knowing a single recipe, it’s instantly knowing a thousand.

Why spend time sorting through the millions of cookie recipes available in books, magazines, and on the Internet? Isn’t it easier just to remember 1-2-3? That’s the ratio of ingredients that always make a basic, delicious cookie dough: 1 part sugar, 2 parts fat, and 3 parts flour. From there, add anything you want—chocolate, lemon and orange zest, nuts, poppy seeds, cinnamon, cloves, nutmeg, almond extract, or peanut butter, to name a few favorite additions. Replace white sugar with brown for a darker, chewier cookie. Add baking powder and/or eggs for a lighter, airier texture.

Ratios are the starting point from which a thousand variations begin.

Ratios are the simple proportions of one ingredient to another. Biscuit dough is 3:1:2—or 3 parts flour, 1 part fat, and 2 parts liquid. This ratio is the beginning of many variations, and because the biscuit takes sweet and savory flavors with equal grace, you can top it with whipped cream and strawberries or sausage gravy. Vinaigrette is 3:1, or 3 parts oil to 1 part vinegar, and is one of the most useful sauces imaginable, giving everything from grilled meats and fish to steamed vegetables or lettuces intense flavor.

Cooking with ratios will unchain you from recipes and set you free. With thirty-three ratios and suggestions for enticing variations, Ratio is the truth of cooking: basic preparations that teach us how the fundamental ingredients of the kitchen—water, flour, butter and oils, milk and cream, and eggs—work. Change the ratio and bread dough becomes pasta dough, cakes become muffins become popovers become crepes.

As the culinary world fills up with overly complicated recipes and never-ending ingredient lists, Michael Ruhlman blasts through the surplus of information and delivers this innovative, straightforward book that cuts to the core of cooking. Ratio provides one of the greatest kitchen lessons there is—and it makes the cooking easier and more satisfying than ever.
Michael Ruhlman is the author of twelve books, including the bestselling The Making of a Chef and The French Laundry Cookbook. He lives in Cleveland with his wife, daughter, and son and is a frequent contributor to The New York Times and Gourmet as well as his highly popular blog at Ruhlman.com.

"Cooking, like so many creative endeavors, is defined by relationships. For instance, knowing exactly how much flour to put into a loaf of bread isn't nearly as useful as understanding the relationship between the flour and the water, or fat, or salt . That relationship is defined by a 'ratio,' and having a ratio in hand is like having a secret decoder ring that frees you from the tyranny of recipes.
Professional cooks and bakers guard ratios passionately so it wouldn't surprise me a bit if Michael Ruhlman is forced into hiding like a modern-day Prometheus, who in handing us mortals a power better suited to the gods, has changed the balance of kitchen power forever.
I for one am grateful. I suspect you will be too." -- Alton Brown, author of I'm Just Here for the Food