All Things Shining: Reading the Western Classics to Find Meaning in a Secular Age (Hardcover) 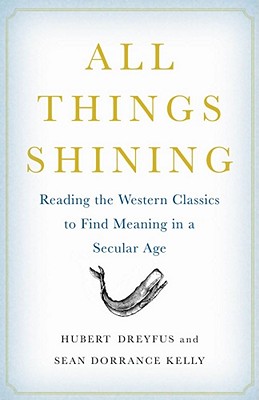 All Things Shining: Reading the Western Classics to Find Meaning in a Secular Age (Hardcover)


This title is likely unavailable. Email or call for price and availability.
In unrelenting flow of choices confronts us at nearly every moment of our lives, and yet our culture offers us no clear way to choose. This predicament seems inevitable, but in fact it’s quite new. In medieval Europe, God’s calling was a grounding force. In ancient Greece, a whole pantheon of shining gods stood ready to draw an appropriate action out of you. Like an athlete in “the zone,” you were called to a harmonious attunement with the world, so absorbed in it that you couldn’t make a “wrong” choice. If our culture no longer takes for granted a belief in God, can we nevertheless get in touch with the Homeric moods of wonder and gratitude, and be guided by the meanings they reveal? All Things Shining says we can.

Hubert Dreyfus and Sean Dorrance Kelly illuminate some of the greatest works of the West to reveal how we have lost our passionate engagement with and responsiveness to the world. Their journey takes us from the wonder and openness of Homer’s polytheism to the monotheism of Dante; from the autonomy of Kant to the multiple worlds of Melville; and, finally, to the spiritual difficulties evoked by modern authors such as David Foster Wallace and Elizabeth Gilbert.

Dreyfus, a philosopher at the University of California, Berkeley, for forty years, is an original thinker who finds in the classic texts of our culture a new relevance for people’s everyday lives. His lively, thought-provoking lectures have earned him a podcast audience that often reaches the iTunesU Top 40. Kelly, chair of the philosophy department at Harvard University, is an eloquent new voice whose sensitivity to the sadness of the culture—and to what remains of the wonder and gratitude that could chase it away—captures a generation adrift.

Re-envisioning modern spiritual life through their examination of literature, philosophy, and religious testimony, Dreyfus and Kelly unearth ancient sources of meaning, and teach us how to rediscover the sacred, shining things that surround us every day. This book will change the way we understand our culture, our history, our sacred practices, and ourselves. It offers a new—and very old—way to celebrate and be grateful for our existence in the modern world.
Hubert Dreyfus is a leading interpreter of existential philosophy.  He has taught at UC Berkeley for more than 40 years.

Sean Dorrance Kelly is Professor of Philosophy and Chair of the Department of Philosophy at Harvard University.  He is also Co-Chair of Harvard’s interdisciplinary committee for the study of Mind, Brain, and Behavior. Before arriving at Harvard, Kelly taught at Stanford and Princeton, and he was a Visiting Professor at the Ecole Normale Supérieure in Paris. He is considered a leading interpreter of the French and German tradition in phenomenology, as well as a prominent philosopher of mind.  Kelly has published articles in numerous journals and anthologies and has received fellowships or awards from the Guggenheim Foundation, the NEH, the NSF and the James S. McDonnell Foundation, among others.
"Occasionally brave philosophers do leap out of their professional lanes and illuminate things for the wider public. Hubert Dreyfus of Berkeley and Sean Dorrance Kelly of Harvard have just done this with their new book, “All Things Shining.” They take a smart, sweeping run through the history of Western philosophy. But their book is important for the way it illuminates life today and for the controversial advice it offers on how to live. A rejection of the excessive individualism of the past several decades, the emphasis on maximum spiritual freedom. In this, it’s a harbinger of future philosophies to come."--David Brooks, The New York Times

"Fascinating. Even if you don’t agree that we are caught in an age of nihilistic indecision, if you attune yourself to the authors’ energetic intelligence and deep engagement with key texts in the West, you will have much to be grateful for."-- Michael Roth, The New York Times

"An inspirational book but a highly intelligent and impassioned one. The authors set out to analyze our contemporary nihilism the better to remedy it. "All Things Shining" provides a concise history of Western thought, beginning with Homer and concluding with Descartes and Kant. But there are extended discussions as well of such contemporary authors as the late David Foster Wallace and, even more startling, of "chick lit" novelist Elizabeth Gilbert.The authors' general theme, and lament, is that we are no longer "open to the world." We fall prey either to "manufactured confidence" that sweeps aside all obstacles or to a kind of addictive passivity, typified by "blogs and social networking sites." Both are equally unperceptive. What makes their case finally compelling is their insistence on the importance of openness, on attentiveness to the given moment, on what they call "a fully embodied, this-worldly kind of sacred." If, as they claim, "the story of how we lost touch with these sacred practices is the hidden history of the West," they have offered some small but shining hints on how we might hope to recover them." --Eric Ormsby, The Wall Street Journal

"Fascinating insights about the search for meaning in our time, and the threat of nihilism. All Things Shining raises fundamental questions about the religious and ethical developments of humanity since the Axial Age.  This book tackles big issues, ones that really matter in our lives today."
--Charles Taylor, author of A Secular Age

“In All Things Shining: Reading the Western Classics to Find Meaning in a Secular Age, two distinguished philosophers, Hubert Dreyfus and Sean Dorrance Kelly, have written an extraordinary, ambitious, and provocative tour de force that frames one of the central questions of our age: how we have passed “from the intense and meaningful lives of  Homer’s world to the indecision and sadness” that too often characterizes modern times. This is compelling reading because in examining the great literary works produced in the history of the West, the authors find new ways of configuring issues of choice, autonomy, fanaticism, solace, and most importantly, the ties that bind us to the past. The book is both brief and yet remarkably comprehensive as it delves into the transcendent values of the classic works that have helped to advance modern thought and inform the development of the Western world. I found myself particularly fascinated by Chapter 5, ‘The Attractions and Dangers of Autonomy.’ As with the rest of the book, reading this chapter, I could hardly put it down”
—Vartan Gregorian, President, Carnegie Corporation of New York

"Dreyfus and Kelly would initiate us into a this-worldly piety of wonder and gratitude; of attunement to moments when something transcendentally excellent shines forth in the mundane. The new age that Dreyfus and Kelly hope for is a polytheistic and basically aristocratic corrective to the leveling of modern culture, which they attribute to the mindsets of monotheism and technology. You will be arrested by their reading of the tradition, and of our current situation. If you find yourself high-fiving strangers when Tom Brady connects with Randy Moss in the end zone from downtown, or would like to, this book is for you. "
-Matthew Crawford, author of Shop Class as Soulcraft

“There is a world out there that is as concealed as it is crucial to the good life. Dreyfus and Kelly have lifted the veil with pedagogical skill and striking insights. It's a world of things shining that can lend grace and depth to our lives. The book is itself a shining thing.”
—Albert Borgmann, author of Real American Ethics

“Stunning! This is one of the most surprising, demanding, and beautiful books I have ever read. My compliments gentleman, and I hope thousands of others share my admiration—and awe.”
--Charles Van Doren, author of A History of Knowledge