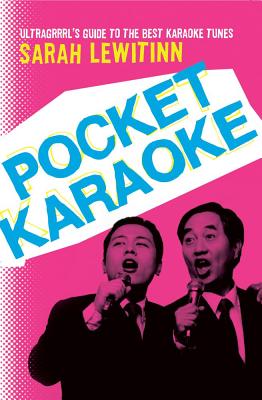 
Available in Warehouse. Wait for Email Confirmation for ETA
Your nights of poring over massive karaoke binders are over! With more than two thousand songs handpicked and organized by music industry insider and DJ Sarah Lewitinn (a.k.a. Ultragrrrl), Pocket Karaoke is the definitive, portable guide to making your next karaoke performance unforgettable -- in all the right ways. This must-have reference book includes:

• SONG LISTS BY ARTIST: Featuring all of the best artists, along with levels of difficulty, drink minimums, performance tips, and similar artists.

• SONG LISTS BY GENRE: From oldies to new wave, disco to emo, funk to hip-hop, all the crowd-pleasing favorites are listed here.

• SONG LISTS BY CELEBRITIES: More than thirty musicians, DJs, and journalists list their top five favorite songs to perform at karaoke and why.

• Plus KARAOKE GEAR -- where to buy online, all-in-one systems, and computer programs to take your obsession to the next level!
Sarah Lewitinn, also known as Ultragrrrl, is a record producer, music critic, DJ, blogger, and music director for Aritzia, a Canadian fashion brand. She has also appeared on various television networks to discuss music and pop culture, including VH1, E!, CNN, and Fox.