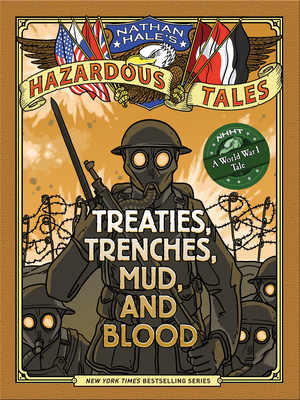 
On Our Shelves as of 9am Today
New York Times Bestselling Series!
“These books are, quite simply, brilliant. . . . Thrilling, bloody, action-packed stories from American history.” —New York Times

Learn about the most well-known battles (and little-known secrets) of World War I with the New York Times bestselling graphic novel series!

In 1914, the world’s biggest countries (and some of its smallest, too) were gearing up for a massive fight. Land, history, geography—each country went to war for different reasons and with different resources. But most ended up the same: sending their young men to fight for their lives in the mud, on the sea, and in the air, in a conflict that would eventually claim more than 9 million lives.

World War I, “The Great War,” or “The War to End All Wars” was fought along thousands of miles of front-line trenches, with mechanized weapons, and dangerous new weapons like machine guns and mustard gas. It left behind a world that was scarred, angry, and traumatized. Its horrifying lessons are still being studied today.

"Students bored to death by textbook descriptions of WWI battle maneuvers should be engaged by this entertaining, educational glimpse at world history."
— Booklist