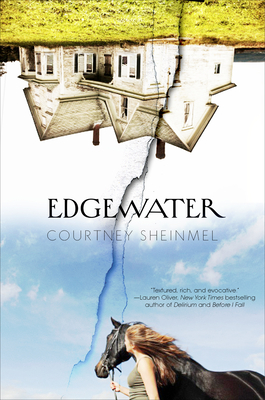 
This title is likely unavailable. Email or call for price and availability.
Lorrie Hollander used to be a rich girl, but now she’s lost everything because of the secrets and lies of the people around her. It’s been 12 years since Lorrie’s mother skipped town and left Lorrie in the care of her unstable aunt Gigi. Together they live in a neglected, decrepit mansion called Edgewater, the eyesore in a town of extraordinary wealth and privilege.

When Charlie, the son of an esteemed senator, takes an interest in Lorrie, her shame for her family and lifestyle runs deep. But what she doesn’t know is that Charlie’s family is hiding something, too, and that their secrets are inextricably tied. Now Lorrie must confront the truth about her family—and everything she ever thought she knew about herself.
Courtney Sheinmel is the author of My So-Called Family, Positively,Sincerely, All the Things You Are, and the Stella Batts series for young readers. Her books have received many awards and appeared on numerous recommended lists. She lives in New York City.
STARRED REVIEW
"With powerful messages of family and self-reliance, Sheinmel’s (Sincerely) coming-of-age tale captivates with its masterful storytelling style and intricate detail."
— Publishers Weekly

"Sheinmel makes the jump from middle grade to young adult with an enthralling examination of family secrets in a lush Hamptons setting...Though the homages to real figures will draw in readers, it’s the complicated family dynamics, particularly with Lorrie’s younger sister, Susanna, that truly shine... Perfect for teen fans of Scandal."
— Booklist