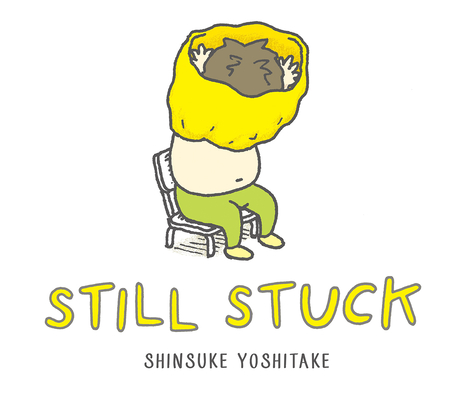 
Available in Warehouse. Wait for Email Confirmation for ETA
Getting dressed and undressed can be difficult, especially for little ones. While getting ready for a bath one evening, a little boy gets stuck in his clothes. He panics and starts to fear what life would be like if he never got unstuck. How will he play outside? How will he stop the cat from tickling his tummy? It’s good thing that Mom is around to help. But when it’s time to put on his pajamas, the boy finds himself with a whole new problem . . .

This fresh, laugh-out-loud funny picture book shows a young boy’s feelings of frustration—and his determination to do things himself. With this whimsical and highly original tale, young readers can imagine what life would be like if they got stuck in their clothes but still kept on going . . .

Shinsuke Yoshitake is an award-winning author and illustrator who creates inventively humorous and lively illustrations. Though based in Japan, his picture books have been translated and published in nine languages around the world.
**STARRED REVIEW**
"With its poker-faced text and effortlessly executed visual jokes, it’s the essence of kid comedy—and almost certain to inspire some real-life disrobing shenanigans."
— Publishers Weekly

"Yoshitake perfectly tells the tale of a young child’s pursuit for independence as he struggles to get his shirt off . . . Cartoon illustrations complement the humorous story line."
— School Library Journal

**STARRED REVIEW**
"The digitally created illustrations of the little boy in his green pants and yellow shirt stuck up over his head are quite hilarious. It’s difficult to imagine anyone not laughing at his plight . . . A perfect choice for storytimes and for children learning to dress themselves."
— Youth Services Book Review